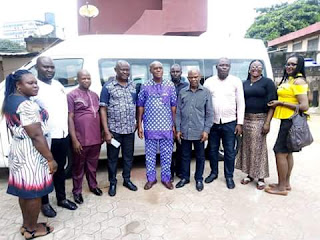 The leadership of the Nigerian Union of Journalists, NUJ, Anambra State Council, Tuesday, October 9, revalidated the inauguration of an arm of the union "National Link Chapel", in Nnewi, Anambra State.

The Chairman and Secretary of NUJ in the state, Emmanuel Ifesinachi and Emmanuel Udeagha, respectively, led the leadership of the union to the inauguration.

While performing the ceremony for the revalidation of the Chapel, the NUJ chairman, Comrade Emma Ifesinachi, commended the founder of the newspaper, Hon. Tempest Chinyelude Udeze Mike, for keeping the outfit afloat since 1994. He urged members to be good representatives of the chapel; and to practice according to the rules and ethics of journalism.

Other members include Uche Nnabuchi, Percy Onyejekwe and Chigozie Iwuchukwu. Com. Emma Ifesinachi and Com. Emma Udeagha, Chairman and Secretary of NUJ in also announced their automatic  membership of the Chapel.

Speaking after the inauguration, the Chairman of the Chapel, Tempest Udeze,  thanked the leadership of NUJ for finding time to come for the revalidation of the Chapel. He promised that the new Chapel will represent the new face of NUJ in Anambra.

National Link Newspaper was floated in 1994. It hit stand on 5th December, 1995. In 2004, National Link Chapel was first inaugurated under Com. Chris Aghanya, the then NUJ Chairman in Anambra.
Email Post