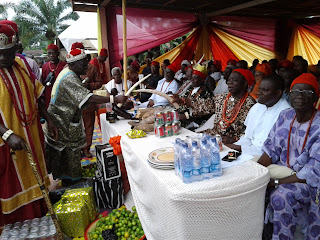 Uli community in Ihiala local government of Anambra state over the weekend celebrated its 2018 new yam Festival with pomp. The new yam Festival which was one of its kind, was celebrated to mark the end of farming, and the start of harvest season.
Delivering his speech from the throne, the traditional ruler of Uli community HRH, Igwe Damian Onyekaonwu(Ezeudoka II)thanked Uli indigenes home and abroad for coming out in their numbers to witness the new yam Festival. He prayed that God who made it possible for them to witness the 2018 new yam festival will also grant them the needed health and strength to go into work after harvest. He thanked all those that ensured that the new yam Festival was celebrated without hitch, and prayed God to replenish them hundred fold.
In a brief interaction with newsmen, the President of Uli Community in Lagos, Chief Ikwuka Viginus Uzomah(Ogbuehiakuchikwadoro 1 of Uli, while adding his voice thanked God for making it possible for the community to celebrate another new yam Festival. He commended the reign of their traditional ruler, whom he described as a harbinger of peace and development. He said that since the traditional ruler ascended the throne, that there has been progress in Uli. He therefore called on indigenes of Uli, to endeavour, and bring their children home, especially during festive periods so that they can appreciate the fact that they have a cultural background.
Adding his voice, Hon. Henry Ojolie About,(Igirigi Uli) thanked God for another year of bountiful harvest. He stressed that the new yam festival is a time for merry, considering the fact that God made it possible for them to go into harvest. He thanked all Uli indigenes home and abroad for finding time to identify with this year's feast. He however called on the state government to fix the problem of bad road network in Uli,  a situation that has made living and evacuation of food impossible for the farmers.
While interacting with newsmen, Dr Mac Wisy(Prophetic Onowu Jesus) thanked Uli community for giving support to their traditional ruler. He said that nothing is greater than God, who has shown his benevolence as this year's new yam festival was bountiful. He prayed that God will bless and see them through to another planting season to harvest. Highlights of the event was the cutting of the new yam, showcasing of different dance, and the display of masquerades.
Email Post
Labels: Social Dairy