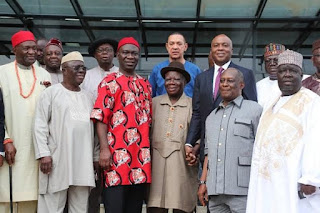 The dust raised by the Minister for Works, Power and Housing, Mr. Babatunde Fashola on possible ceed of 2023 Presidency to the South West has attracted the ire of Buhari Support Organisation, BOS, in the South East.
The group in opposition to Fashola said it wishes to state categorically clear that the 2023 would be the turn of the South East geopolitical zone to produce President of Nigeria.
The caucus of the BSO South East Zone which met in Enugu from Saturday to Sunday, after exhaustive and detailed analysis of the zoning and rotation of president convention from Southern to Northern Belt in 1999 to date; came to the inevitable conclusion that it would be the turn of the South East to produce President of Nigeria from Igbo extraction.
In a statement endorsed by Rt. Hon Stanley Ohajuruka and Mr. Godwin Onwusi as coordinators of the group said “Our proclamation is hinged on the truism that the rotation convention was introduced in 1999 for equity, justice, peace and unity of our dear country.
“That the rotation convention is meant to erase the fears of marginalisation of any ethnic nationality, hence implant sense of belonging to all Nigerians.
“We are also witnesses on how His Excellency, Dr Alex Ekwueme of blessed memory was shoved aside from a party he co-founded, in order to appease the South West, and His Excellency Ogbonnaya Onu was also in the same manner shoved aside, hence the commencement of the rotation of president from the South West in 1999
“That in spite the shoddy manner Ekwueme was treated at the Jos Peoples Democratic Party convention and Onu at the defunct All Peoples Party convention at Kaduna, Ndigbo still went ahead to vote along the agreed rotation convention.
“It is as well worthy to note that in spite of unintended consequences the zoning convention train progressively moved North in 2007, South South in 2010 and North in 2015.”
The group noted that taking into consideration that their brothers and sisters of the South West and South South were primary beneficiaries of the zoning convention – 8 and 5 plus years respectively; it behoves on all patriots and people of good conscience to accord the South East our due.
“The true position is that since our return to civil rule in 1999, the South East is the only geopolitical zone in the Southern Belt that had not tasted the juicy and cosy ambience of Aso Rock Villa.”
We are patiently waiting for 2023 for South East to occupy Aso Rock.
“Without being immodest anything contrary will regrettably reinforce the view of those who do not cherish the uncommon stride of Nigeria as a giant of Africa. And most importantly will unwittingly reinforce the views of those who both overtly and covertly preach a disintegrated Nigeria,” it warned.
By the same token, the group reminded Fashola that President Muhammadu Buhari’s edifying beads is brand collectively woven by all.
“Accordingly, we shall mobilise Ndigbo both home and abroad, in a Bi-Partisan manner to vote for Buhari in 2019. For Buhari’s victory is surest route to our quest for President in 2023,” the group stated.
Email Post