Gunshots, Teargas In Anambra Assembly As Lawmaker Feared Dead, Others Scamper For Safety 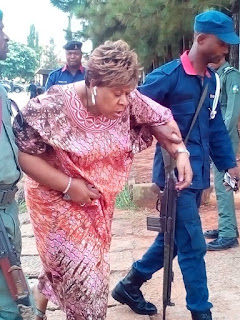 The Anambra State House of Assembly Complex was Thursday barricaded by security agents armed to the teeth to forestall breakdown of law and order.

The security agents shot sporadically into the air to scare journalists away from covering the drama that erupted at the state assembly comlplex which left the lawmaker representing Onitsha-South 2 Constituency unconscious over severity in breath due to tear-gas fired by the police officers manning the assembly complex.

This was due to an impeachment move on the former Speaker Rita Maduagwu which produced Ikem Uzoezie the member representing Aguata 2 state constituency as the new Speaker of the 6th assembly.

As at the time of filing this report, security agents were chasing journalists away with guns threatening to shoot anyone at sight on the ground that it was an order given to them from the state police headquarters.

Journalists however scampered for safety as they were not allowed access into the state assembly complex.
Email Post