The modest home of APC National Leader, Asiwaju Bola Ahmed Tinubu is certainly the most known on Bourdillon Road in Ikoyi, Lagos.
Now a new mansion on the road will henceforth be competing for attention.
The house is owned by Sir Tony Ezenna, the 61 year-old chairman of Orange Drugs Limited, a pharmaceutical company in Lagos.
Tony did the house warming at the weekend and opened the even more luxurious interior for his guests to rejoice with him.
Many politicians were there: Minister of Labour Chris Ngige, senators Andy Ubah, Dino Melaye, Hope Uzodinma, and many others.
The pictures of the house have been trending in the social media ever  since 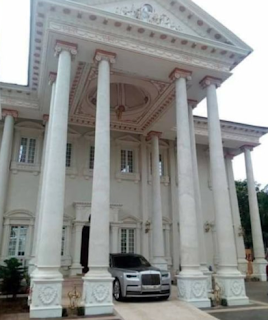