Uneasy Calm,  tension has enveloped the People's Democratic Party, PDP in Imo State following the emergence of a factional leadership of the Party in the State otherwise known as n-PDP.

It was gathered that the rebirth of the fresh Political group was unveiled during a Press Conference held at Villa Garden on Monday, 26th November, with a close aide of Sen Samuel Anyanwu (Samdaddy), incumbent member representing Owerri West Senatorial district in the person of Mr Fabian Ihekweme ( aka Omu), who until 25th November, 2018 was the Director Media and Publicity to Samdaddy as acting Chairman of n-PDP.

Report have it that the emergence of Ihekweme, a close aide to Samdaddy, a guber aspirant who is currently challenging the outcome of the October 1st, 2018 Imo PDP guber Primaries that produced Rt Hon Emeka Ihedioha as Candidate of the People's Democratic Party, PDP, Imo State in Court has continued to generate mixed reactions as a section of Imo people view the emergence of  n-PDP as distraction to a Party that many adjudged as the only opposition Party in the State prepared to wrestle power from the incumbent come 2019 both at the National and State.

Also, the embattled Chairman of n-PDP in Imo State popularly known as 'Omu' as at the time of filing this report is yet to tender his resignation letter disengaging himself as Director Media and Publicity of Sen Samdaddy's Campaign Organization.

It was gathered that supporters of Sen Samdaddy Anyanwu have been advised to remain calm waiting for directives from the leadership of n-PDP while some of them go ahead with the Court case at the Federal High Court, Owerri

Meanwhile the leadership of the People's Democratic Party in Imo State, has kept mum to the development, also efforts to reach the legislative media aide to Sen Samdaddy Anyanwu proved abortive. 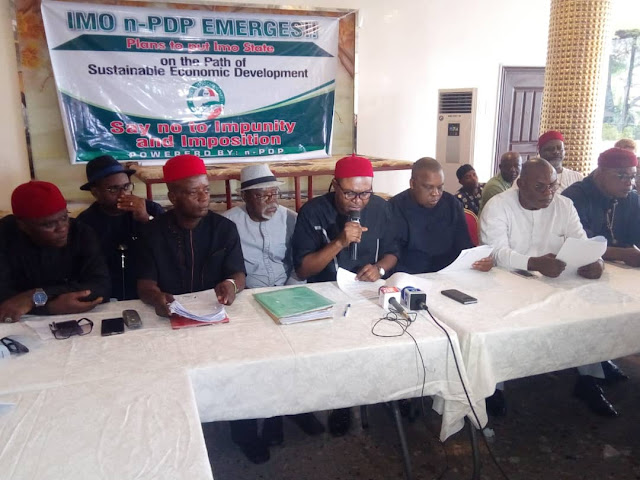