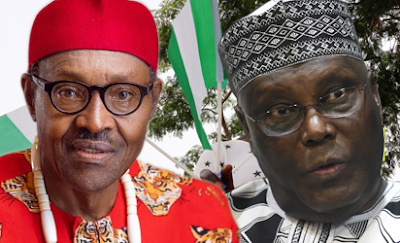 President Muhammadu Buhari and his main rival, Abubakar Atiku, Peoples Democratic Party, PDP, presidential candidate, were yesterday locked in verbal war over the Electoral Act Amendment Bill. President M Buhari and Atiku While the President got the support of Buhari Media Organisation, BMO, in his decision to withhold assent to the Bill, which the President claimed was in the interest of the country, the claim was immediately ridiculed by the Atiku Abubakar Campaign Organisation which said the President’s decision has evaporated every trace of his integrity. The BMO in a statement signed by its Chairman Niyi Akinsiju and Secretary, Cassidy Madueke, said the decision not to sign the Electoral Act (Amendment) Bill as passed by the National Assembly had saved the country from a chaotic electoral process. BMO said:  “It is trite that the deployment of a new electoral law only two months to an election is a recipe for chaos. Introducing a new law that redefines fundamentally the processes of our elections is only setting a shaky foundation for the 2019 polls. “Also, with such fundamental changes such as the introduction of electronic transmission of results, and the compulsion in the use of the card reader without any remedy, among others, INEC staff would have to be trained and re-trained within two months, a period that is certainly not enough for that to happen.” The group noted further that an ECOWAS Protocol on Democracy and Good Governance discourages any forms of amendments or changes to electoral laws six months before any election, and hailed the President for complying with democratic best practices. It added that it was no fault of President Buhari that the leadership of the National Assembly delayed the amendment since mid 2017. “The Federal legislature had in the process of presenting the Bill for the President to sign in the last four occasions, made several unforgivable drafting errors. At every point, he identified these errors and sent them back for corrections – and he was right every time. So much that the third time the National Assembly passed on the Bill for the President’s signature, they had conspicuously and suspiciously removed the use of the card readers during elections. The President sent it back and insisted that it be included.” The group noted that the most recent amendment that the National Assembly sent to the President was not just late, but also contained grave drafting errors that if left to proceed, would give room for rigging and manipulation of results of elections. BMO said:  “Any attempt by some desperate unpatriotic federal lawmakers to override the President’s veto would amount to a battle line being drawn between them and the Nigerian people and their right to free and fair elections. “We call on the sensible members of the National Assembly to prevail and ensure that the electoral processes are not toyed with for the self-serving interests of some of their colleagues; but rather ensure that the errors identified by President Buhari are looked into, rectified and sent back for his assent. “The President would not do anything to hurt Nigeria’s democratic and electoral processes, as the last three occasions he sent the Bills back on grounds of grave errors, he was proved right when the National Assembly effected the corrections he proposed, and this time would not be different, BMO said.” Buhari has short-changed Nigerians — Atiku The Atiku Campaign reacting through its spokesman, Prince Kassim Afegbua, chided the President and his supporters for failing to keep faith with commitments freely made to Nigerians recently on credible 2019 polls. He said: “The fact that President Buhari refused to sign such bill which attempts to strengthen the process of free, fair and credible election, means that he’s not sincere with Nigerians and his earlier stated commitment to free and fair election was just a fluke. “His supporters have suddenly become paranoid over a law that should guarantee credible polls, yet they will tell you they have a man of integrity. How do you define integrity in this manner? “How can a President decide to short-changed his own people by refusing them a law that would accommodate majority of voters and ensure the votes actually count. “His decision is not only ridiculous, embarrassing and vainglorious, it smacks of  irresponsibility to travel on that road. It is not only a contradiction on the part of the President, it is an admittance that he has lost confidence of the people and not truly sure of his fate in the elections. “We have heard some grapevine information that suggested that if the president decides to sign, he would have signed away his defeat. “Scared stiff, he jettisoned a bill that provides opportunity for a robust electoral process just for self aggrandizement and ulterior motives.     “We will remain resolute in our call that the right thing must be done, and our people’s votes must count as we prepare the ground for the electoral defeat of this under-performing government and president full of contradictions, full of self-righteous indignation and pretentiousness. “It is a global embarrassment and insult on the collective psyche of Nigerians who are desirous of seeing a free, fair and credible election in 2019.”
Email Post