POLICE IN ANAMBRA ASSURE OF ADEQUATE SECURITY IN 2019 POLLS 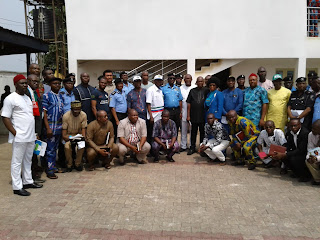 Police authorities in Anambra Sate have assured that the body will maintain neutrality and professionalism in the 2019 general elections in the state.

The Commissioner of Police in the state, CP Baba Umar Garba, gave the assurance on Wednesday, January 30, at the state headquarters in Awka, during an important meeting of  critical election stakeholders in preparation for the 2019 general election.

The police boss assured that there will be level playing ground for all politicians and political parties participating in the polls; so that the legacy of free and fair election achieved by the Command during the recent governorship election in the state will not only be sustained during the general election but will also be consolidated.

The CP assured that the Command will not leave any stone unturned in order to ensure the success of the election. He said that the Command has initiated strategic action plan in accordance with the vision and mission of the Inspector General of Police, IGP Mohammed Abubakar.

He also said that the Command will organize training and capacity building for officers and and men of the Command on election security and respect for Hunan rights, partner sister agencies for effective coverage, emplace adequate arrangements for safety and security of all the accredited local and international observers in the state, as well as undertake constant raids on  black spots and other misguided elements who could constitute a threat  to peaceful electoral process, among other modalities.

After the interactive session, political parties and contestants vying elective positions signed peace accord as a commitment towards ensuring peaceful election without confrontation and violence.

Speaking to newsmen after the exercise, the Director of Strategy, PDP Presidential Campaign in Anambra, Hon. Harry Ohanezi, said the interactive forum availed the stakeholders of the opportunity to brainstorm on electoral security, review and implement security measures throughout the electoral process to ensure the success of the general election.
Email Post