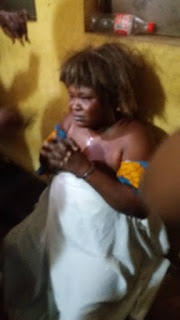 A 22 year-old single mother identified as Happiness Mmadu, was arrested at the Nnamdi Azikiwe University Teaching Hospital, NAUTH, Nnewi, on Wednesday, January 30, for allegedly conspiring with one Dorothy Sunday to sell her three day-old twin baby.

Hospital management told our reporter that Dorothy, who said she hail from Izzi in Ebonyi State, entered the maternity ward of the hospital in the morning hours of Wednesday, and claimed that Happiness Mmadu was her sister.

According to the source, a nurse went to dress the maternity bed where the twins were lying only to discover that one of the twin babies was no more there.

"She raised alarm and nurses at the ward went after Dorothy, who was already approaching the hospital gate.

"The nurses snatched her handbag, opened it and discovered that Dorothy hid the baby inside the bag; so, the baby was taken from her, and angry spectators pounced on her, beat her up stripped her, and was about setting her on fire save for swift intervention of police operatives from the Central Police Station, Nnewi, who arrived and whisked her away together with Happiness Mmadu, mother of the twin babies."

When our reporter interviewed the suspect at the Central Police Station, Nnewi, she confessed that Happiness asked her to come and take the male baby so that she would raise money to pay her hospital bill; which, according to her, was as much as N200,000.

"My name is Dorothy Sunday from Izzi in Ebonyi State. I am a trader at the relief Market, Onitsha. Happiness called me and told me that she delivered her twin babies through caesarian session; and was billed over N200,000. She begged that she wanted to sell the babies to raise money for hospital bill; and also take care of herself,  because her parents are not aware of her condition, and that she had nobody to help her."

When interviewed, the mother of the twins, said that Dorothy approached her in the hospital and offered to assist her run some errands since there was nobody on ground to assist her. "Dorothy was at the ward looking after my babies while I was outside washing my clothes before I was told that she put one of the babies in her handbag, and was moving out.

Earlier, one of the nurses at the maternity ward told our reporter that Happiness Mmadu delivered on 25th January and was discharged on Tuesday, January 29, but she remained in the hospital till Wednesday, January 30th when the incident occurred.

Meanwhile, the Chief Medical Director of the hospital, Prof. Anthony Igwuegbe, who visited the suspects at the police station, asked the police to release the nursing mother so that she would take care of her twin babies; while the principal suspect, Dorothy Sunday, should remain with the police pending the outcome of their investigation.
Email Post