The team which arrived the Centenary Field of the Most Holy Trinity, Onitsha, at about 5.30pm, has thousands of teaming supporters and party faithful on ground to welcome them.

In the team were Atiku Abubakar and his Vice Presidential candidate, Peter Obi and their wives. Others are the national chairman of PDP, Uche Secondus; the President of the Senate, Bukola Saraki and other senators; South East PDP governors, members of the House of Representatives of the PDP platform, among others.

Speaking at the rally, Atiku greeted Anambra people and Igbo in general for their unalloyed show of love towards him and the Peoples Democratic Party. He said that during his visit to the palace of the traditional ruler of Onitsha, Obi Alfred Achebe; the monarch tasked him to restructure Nigeria, complete second Niger Bridge and construct federal roads in the country.

He assured Anambra residents and Igbo people that not only will he accomplish all the things demanded of him by the Obi of Onitsha, but will also inculcate Igbo people in the helm of affairs of the country; adding that his government will rescue Nigeria from its present state of decay.

Also speaking at the rally, the vice presidential candidate, Peter Obi, urged Anambra people to vote Atiku/Obi ticket, stating that PDP under Atiku and Obi will replicate all the good things he did in Anambra when he was governor.

Also speaking, the national chairman of the party, Uche Secondus, urged Anambra and Igbo people to vote PDP at all levels, saying that PDP will restore the dignity of the country lost under APC regime. 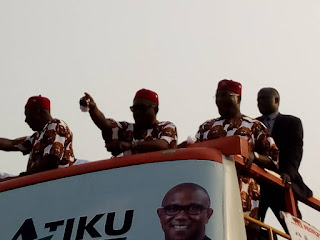 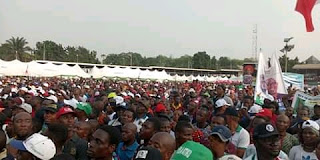