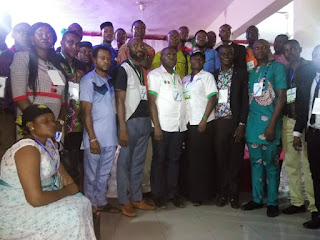 Group, Center for Strategic Leadership and Youth Orientation, CENSTLEYO, an NGO, Saturday, February 2, 2019, at the C.W.O Hall of Our Lady of Assumption Cathedral, Nnewi, Anambra State,  organised a Town Hall Electoral Debate/ Dialogue for candidates of the House of Representatives vying to represent Nnewi North, Nnewi South and Ekwusigo Consitiuency.

The meeting was attended by hundreds of people drawn from youths, women and religious organizations, traders, politicians, non governmental organizations, among many others.

However, out of three political party candidates invited for the programme, viz PDP, APC and APGA candidates, only candidate of the Peoples Democratic Party, PDP, Hon. Chris Emeka Azubogu, with his supporters turned up for the town hall dialogue; while those of the All Progressive Congress, APC; and the All Progressives Grand Alliance,  APGA; Hon. JK Onyeka and Hon. Iju Anthony Nwabunike, respectively, with their teaming supporters, shunned the meeting.

Meanwhile, the NGO gave Hon. Chris Azubogu the opportunity to enumerate his achievements as a federal lawmaker over the years, and to address his audience on what he intends to do differently if given a third term opportunity.

While presenting his scorecards, Azubogu said he has constructed over 40 kms of roads across 15 communities within the federal constituency, managed many erosion problems, supplied hundreds of computers to schools, built/renovated many classroom blocks, constructed perimeter fences in schools, built palm oil and garri processing plants in some communities, sponsored training of over 1,000 persons in different skills, constructed bridges to link communities and villages within the constituency, provided free medical treatment for over 8,000 patients having different health challenges, among many other achievements.

He also enumerated 8 bills and 13 motions he sponsored in the House of Representatives, which, according to him, ate geared towards improving the welfare of his constituency and Nigeria in general. He begged his constituency to support his third term aspiration, which he said, would give him the opportunity to consolidate on his achievements.

Earlier in his address of welcome, Mr. Imma Felix Emeka, the Initiator of the programme, said that the purpose of the debate was to help voters make informed choice at the ballot box; stating that political debates benefit democracies in many ways, including encouraging candidates to focus on public policy issues rather than personality or religion; reducing the potential for violence by prompting civil discourse; and holding elected officials accountable to their campaign promises once in office.

"Debate of this nature presents us with the opportunity to directly listen to our would- be representatives to present and defend their views face-to-face, which enables them to further develop and articulate their positions before open electioneering campaign ends. In doing this, statements, policy positions, and promises made becomes part of public record with which constituents depend on to holding them to account during post election debate or constituency score presentation", he added.

Addressing newsmen at the end of the programme, the Head of Directors of the NGO,  Dr. Kingsley Ubaoji, said that the three candidates invited for the programme were carried along throughout the processes of organizing the event; and expressed surprise that even after speaking with the candidates in the early hours of the day, informing them of the arrangements on ground already, yet, they shunned the exercise.

He said, "This organization carried the three candidates along in all the processes and steps of preparing for this event. Specifically, the APGA candidate proposed for this town hall debate. We bought into the initiative and informed the APC and the PDP candidates, and they accepted it.

Highpoint of the event was presentation of certificate of participation to Hon. Chris Azubogu by CENSTLEYO.
Email Post