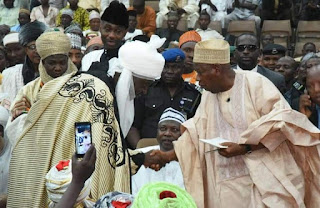 The development effectively reduces the jurisdiction of Emir Sanusi Lamido Sanusi II, who hitherto was in charge of the Kano Emirate Council comprising 44 local government areas (LGAs) but will now be in charge of only 10 LGAs. It also  fuelled the speculation that the Ganduje administration was serious about deposing Sanusi II. The governor spoke at a ceremony organised for the emirs in charge of the new emirates to express their appreciation to the governor for their appointment. The new monarchs include Ibrahim Abubakar, the Emir of Karaye; Aminu Ado-Bayero, the Emir of Bichi; Ibrahim Abdulkadir, the Emir of Gaya, and Tafida Ila, the emir of Kano. Sanusi was absent at the occasion. The Friday court order had followed a suit filed by one Rabi’u Sule-Gwarzo challenging the decision of the governor to create the four additional emirates in Kano. Justice Nasiru Saminu gave an interim injunction directing all parties involved in the suit to maintain the status quo pending the hearing and determination of the motion on notice. Saminu also gave an order directing the state governor and the Government Printer to stop the publication and release of the law that created the four new emirates. The state House of Assembly had reviewed the law on Local Government and Chieftaincy Affairs seeking the upgrade of some traditional rulers to the status of First Class Emirs. This followed a petition by a team of lawyers led by Ibrahim Salisu Chambers and within 48 hours of the passage of the bill by the lawmakers Ganduje last week, gave his assent. A State Emirate Council was also established by the bill, that will have the five Emirs heading the emirates, the Secretary to the State Government, the Commissioner for Local Government, Chairmen of all the Local Government Councils in the state, at least two king-makers from each of the five Emirate Councils as well as not more than five others to be appointed by the state governor, as members. Speaking at the ceremony organized for the four newly emirs, yesterday, Ganduje said he had received the information of planned protests against the appointment by some aggrieved individuals. He, however, insisted that the law had gone through all the constitutionally required processes and was irreversible. The governor warned that any violent reaction against the new law would not augur well in Kano as he called on residents to exercise restraint to allow peace and tranquillity to reign in the state. Ganduje stressed that the idea behind the breakup of the Central Emirate was to share the burden of development of the state to the new four emirate councils for effective service delivery.
Email Post