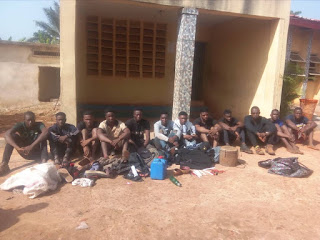 The police in Anambra state has nabbed over 19 Cult members of Aiye confraternity, during their initiation at ukulu forest in Dunukofia LGA of Anambra State.

They were caught ,following credible intelligence that some suspected cultists were initiating new members into their cult group.

In the same vein a similar exercise also took place at mbaukwu in Awka South LGA where four (4 )male suspects were equally arrested and exhibits recovered include One dagger, one axe, charms and substance suspected to be cannabis sativa(Indian Hemp)

All suspects confessed to be members of secret cult known as Ayes confraternity.

Furthermore, 12 other notorious male Suspected cultists were arrested from their hideouts at various locations and they all confessed belonging to SVC secret cult group.All cases are under investigation after which suspects would be charged to Court for prosecution, as confirmed by the Anambra Police Public relations office, SP Mohammed Haruna.
Email Post