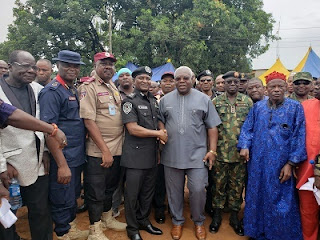 The Commisioner of Police, Anambra Command, Mr Dan Daura has lauched Operation Puff Adder, at Okpoko Divisional Police Station Ontisha, which is aimed at stepping up police operations in and around the state with an aim at flushing out miscreants and criminals from the State.
He said that, ``we assure peace, to the law abiding residents and visitors to the state for them to enjoy lasting peace and safety.’’

``It is significant that we have chosen to launch this Operation in the commercial city of Onitsha as the command is resolute in its drive to make the city safe for residents.
``We shall extend this operation to every nook and cranny of Anambra State, so that every  'onye Anambra’ can sleep comfortably and engage in their lawful activities in secure atmosphere.

The operation, an initiative of the Acting Inspector General of Police (IGP), Mr M A Adamu, seeks to bring to the barest minimum the issue of crime in all states of the federation.
Speaking at the launch the Governor of Anambra State ably, represented by Secretary to the State Government, Prof. Solo Chukwulobelu, re-emphazied government's commitment  to rid the state of criminal elements, which has been the strongest point of Chief Willie Obiano’s government.

He went on to say ``Security has been top priority of this administration since inception. We have made efforts to adequately equip the police and provide necessary support to all other security agencies in the state -- the Army, Navy, Airforce and Vigilance Groups.
``We have declared Anambra a zero tolerant state to all forms of criminality; we have shown commitment and resolve to ensure the safety of Ndi Anambra and all who reside within the state."