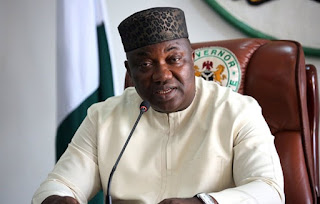 The executive governor of Enugu State, Ifeanyi Ugwuanyi, has commended Airtel Nigeria, for upgrading and modernising its network infrastructure in Enugu as well as rolling out its 4G services. Ugwuanyi spoke while a team of Airtel employees led by its regional operations director, South Region, Dapo Dosunmu, paid him a courtesy visit at the State House.

He thanked Airtel for modernising its network, noting that the initiative would help boost personal productivity, trade and commerce as well as provide solid platforms for people to become successful in their respective endeavours.

The governor later attended a consumer launch event at the Airtel regional office on Tuesday, May 7, in Enugu, where he formally launched Airtel’s network 4G services in the State. While thanking the governor for his support and for creating an enabling environment for businesses to thrive, Dapo Dosunmu, Regional Operations Director, South Region, who represented the chief executive officer and managing director of Airtel Nigeria, said Airtel was committed to the state “and will continue to connect much  more towns to our 4G network.

“This is not just the launch of 4G in Enugu but a total modernisation of the Airtel Network Infrastructure in Enugu with new and innovative offerings that will empower and offer real value to the great people of this State,” he said.