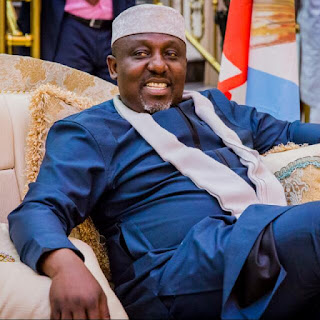 How Okorocha ‘garnisheed’ Imo for his last supper

That the eight-year reign of Governor Rochas Okorocha left Imo State a wasteland is common knowledge to most Imo people. Our people are not stupid. Indeed, they are witnesses to the vandalism callously meted against their state. They are also aware of the vicious vendetta Okorocha unleashed on our mother land in the two months after he lost the ‘guber’ election. Since he never planned for an exit, the loss at the polls sent him into what one wants to describe as a paroxysm of plunderation. It’s something that is also called scorch earth policy in war: which means that you don’t just conquer an enemy, you raze him to dust. Okorocha did not only conquer Imo, he tried to obliterate her.

Imo people are of course witnesses to the frenzied last minute pillage of the state’s physical assets meanwhile more debilitating and unseen  havoc were unleashed on the state by the exiting band. Here are some of them.

One, about 150 (yes, that isn’t and error) garnishee orders are hanging around the neck of the state right now. A garnishee order, for those who may not know, is a judgment entered against a person or state which must be forcefully executed. It is often borne out of lawlessness of the state and also, criminal collusion by officials of state against the state.

Recall that in eight years of outlawry, Okorocha never obeyed any court order or judgment. And there are dozens of them. Most of these cases, especially the contractual ones had gone their full courses and judgment passed and in some cases, execution is being levied.

The result of this catalogue of garnishee orders are liens running into billions of naira.

Right now, many of the holding bank accounts of Imo State government are under liens. This means that whatever funds may be in these accounts are on lockdown by the courts. The state government would have to show cause quickly why these sums should not be handed over to some of the litigants.

One hundred and fifty garnishee orders! This cannot be heard of anywhere else in Nigeria or even the world at that. Okorocha and his gang practically ‘garnisheed’ Imo for supper!

Another baleful bequeathal of Okorocha to Imo people is the use of concession to hijack and acquire some of the most lucrative and revenue-yielding businesses of government. Some of these outfits dubiously acquired include the inimitable Concorde Hotels Limited built by Chief Sam Mbakwe about 40 years ago. Billions of naira of state fund was deployed to renovate it a couple of years ago yet the edifice is in shambles now; yet the hotel is said to be under concession and the new government cannot have access to it. Not ever a few rooms to be allowed as a holding bay for new appointees invited from outside the state as was the practice.

Water works, some hospitals, state transport company and Adapalms Limited; to name just a few. All the new government of Ihedioha can find are concession documents but not cash or a trace of it from the numerous concession arrangements.

The story of Adapalms is particularly pathetic. Probably the biggest integrated palm oil estate to be found anywhere in the world, Okorocha immediately hijacked it on assuming power in 2011. He claimed to have concessioned it to a hurriedly set up foreign firm, Roche. But as it turned out sooner, Roche is the alter ego of Rochas.

This unbridled brigandage remained so for eight years. No revenue from concession, no proper management, no new seedlings planted and no fresh technical input for an enterprise that could easily yield more revenues to the state than funds coming from federal allocation.

Did you know that Imo State had a large rubber plantation? Did you know that Imo had Cocoa plantation? Is it not common knowledge that Imo State is one of the centres of cashew nuts production in Nigeria? All of these common wealth were being exploited stealthily by Okorocha and his rapine gang. But just last week, Governor Emeka Ihedioha inaugurated committees to review and revamp both the Adapalms and the rubber plantation. More to come.

A third atrocity committed against Imo people by Okorocha which many may not notice is the states’ pension racket. For eight years Rochas did not only fail to pay substantial pensions to freshly disengaged and retired civil servants, he damaged the entire record of the states’ pension scheme. No trace is left for the in-coming government.

As it stands now, it is almost impossible to determine the status of the pension system in Imo State today. The implication of this in terms of finance and psychological well-being of the service is better imagined.

But more dastardly is the fact that Imo is among the few states in the country not to have keyed in to the national Contributory Pensions Scheme (CPS) being managed by National Pension Commission (PENCOM). According to the commission, Imo State had not commenced the remittance of contributions and had not funded the accrued rights either.

Imo is the only state in the southeast not to have done this. Imo State University had to unilaterally commence the scheme in spite of the state government. Of course there is no doubt that through his eight woeful years Okorocha would have deducted workers’ pension contributions but never remitted them. Such is the disdain he had for the workers of Imo and his people.

Now this, at a recent Extended Executive Council meeting, the management of the Imo State Ministry of Works confessed that they were never allowed to do any projects for all of eight years Okorocha held sway. Most damning is the fact that the extensive underground Owerri flood channel built by Sam Mbakwe was never de-silted for eight years, they reported.

The result is that today, Owerri is under a deluge of flood at the slightest rain. Apart from the flood-prone Chukwuma Nwoha by Dick Tiger roads in Aladinma area of Owerri, Port Harcourt Road by Assumpta, Okigwe road and several other parts of Owerri are no-go areas when it rains. Ihedioha’s Exco has decided to begin by de-silting the entire underground channels.

Most of the so-called roads built by Okorocha are being rapidly washed away by the rains. Hardly any road is safe and easily pliable. The fourth inland road has lost one lane to erosion and it is cordoned off. The flyover across Okigwe Road by Orji is now closed because a portion is caving in. It was built by Roche, a firm synonymous with Rochas and redolent with fraud and odious shenanigans.

For the first time in recent times and under the watch of Okorocha, Heartland Football Club, went into relegation from the top division and managed to return to top division. It took the intervention of a newly sworn in Governor Ihedioha to pull back the club from the precipice of another relegation. Heartland FC played away from its home turf, Dan Anyiam Stadium last season. Okorocha’s government could not maintain his number one stadium.

In fact all the sports facilities are in utter decay.

Such is the state of Imo under Owelle Rochas Okorocha for eight years. He literally ran Imo State aground. Yet, to cover his shame, he is in the media daily to extend his lies and propaganda. But he seems to forget that Nigerians know that tweaking the truth is an integral part of Okorocha’s life? No amount of lies and propaganda can cover his baleful legacy in Imo State.