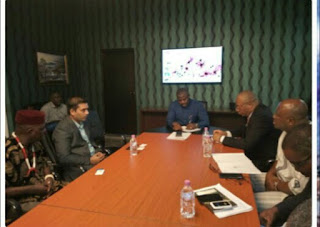 A delegation of investors from Green Fuels Ltd and Green Liquefied Natural Gas Ltd has met with Imo state government on the modalities for the setting up of a compressed Natural Gas (CNG) plant in Imo state.

The investors who met with Imo State Government on establishing a modular and scalable CNG plant  had fruitful discussions with the Deputy Governor who represented the government.

The Deputy Governor, Chief Gerald Irona, in his keynote address at the meeting was happy that Green Fuels Ltd a giant in the industry has found Imo as a safe heaven for there investments. He promised to communicate the state government, of the desire of the company towards establishing in Imo state.

He stressed that the efforts of H.E Rt Hon Emeka Ihedioha is paying off, and called on other investors who are still tasting the waters to come and invest in Imo, which has the abundant natural and human resources required to drive Industry and Commerce in the South East.

In his response, the head of the delegation, Dheerendra Singh said the meeting was fruitful as government has agreed in principle to work with their company, and their coming to Imo state is going to open new opportunities and  lift Imo from the shackles of darkness.
Email Post