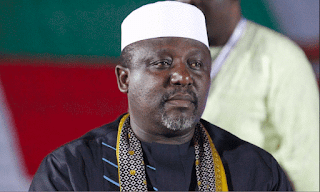 The Economic and Financial Crimes Commission (EFCC) says it has obtained orders for the interim forfeiture of assets traced to a former Imo governor, Rochas Okorocha, and his wife.

Imam said that the commission also obtained similar order on a property traced to a former aide to Okorocha, Mr Paschal Obi, and the former governor’s daughter.

He said that the commission had established prima facie cases against the suspects which they would answer to.

Imam said that the commission would like to know how the Rochas Foundation and other accomplices acquired or converted some of the property for personal use.

The EFCC chief said that while the hospital was traced to Obi, the remaining property were traced to the former governor and his family, including his wife and daughter.

“We hope to get permanent forfeiture orders on the property in order to return them to the people of the state,” he said.

Imam said that all the facilities, including the schools, would remain functional as the commission would not like to shut them down for the sake of the students and other users.
Email Post