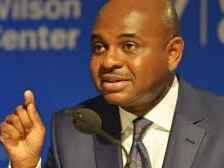 The  Annual Lecture for the remembrance of Chukwuemeka Ojukwu held yesterday was an intellectually filled one as,
Professor Kingsley Chiedu Moghalu, PhD, OON, FCIB, LLD
Former Deputy Governor, Central Bank of Nigeria Governor, Convener, To Build a Nation (TBAN), made startling revelations on the prospects of Ndigbo in the Nigerian state and economy.

In his emotion laden lecture he went down memory lane to eulogize, the Late General (Dim) Emeka Odumegwu Ojukwu,(Ikemba Nnewi) who he described as a great man, as well as the son of a great man by all standards. He said that the need to celebrate a legend can't be over emphasized because of the legacy he left in the sands of time " we celebrate a legend, a visionary African of courage who took an indelible place in history with his leadership of Eastern Nigeria as a military governor at a time of grave national crisis, and in the shortlived Republic of Biafra"

Prof Moghalu, went on to state that without his dogged stance on the large scale massacre (pogrom) of Igbo's in the Northern region of Nigeria after the July 1966 counter coup there won't have been anything known as Biafra today. He stressed that it was the failure of the Aburi Accord that gave rise to what is today known as Biafra, which was championed by this late hero.

He however stated that " these two factual points are important because Nigeria continues to wrongly hold Ndigbo as a people collectively guilty of the secession attempt, as if Igbo's woke up one bright morning and decided to leave Nigeria"

He commended Ojukwu for answering to the call of duty by rising up to the occasion to protect his people which history has vindicated him of today, as a true leader.

He maintained that the narrative that the 1966 coup was largely an Igbo coup was not only diversionary but also a wicked act to paint the Igbo's black in Nigeria, as the coup was not an Igbo coup but rather a military affair which went sour, because of its make up and insinuations from diverse schools of thought.

Prof Moghalu in his lecture, went further to lament the unspoken conspiracy to prevent a person of Igbo ethnic nationality from becoming President of Nigeria, as Nigeria still nurses a huge, deep rooted prejudice against the Igbo man. He advocated for national healing saying "difficult as it might be, the Igbo should not remain permanently bitter about the loss of lives of our loved ones. In his words "If we remain permanently bitter, we can't heal. And if we can't heal, we can't compete effectively in the political terrain in Nigeria"


He reiterated his resolve as an Igbo man to be a great majority of the Igbo, believing in building a Nigeria that can manage its diversity towards achieving stability and prosperity, which must be anchored on justice, equity and equality for all Nigerian citizens, taking a stand from the restructuring of the constitution instead of the unitary federation we have today.


He further advocated for a president of Nigeria in 2023 to come from the south east and urged Igbo's as a matter of priority, lobby other parts of the country within the Democratic context which should be along the lines of equity and justice. He also called on Ndi Igbo to jettison the wrong connotation of Igbo Presidency, rather than a Nigerian President of Igbo Origin.
Email Post