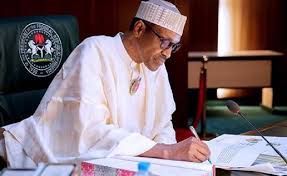 President Muhammadu Buhari has signed the bill seeking to amend the deep offshore and inland basin production sharing contract (DOIBPSC) act into law. A bill that was sponsored and advocated for by Senator Dr Ifeanyi Ubah, the Senator Representing Anambra South Senatorial Zone, who is also a major player in the oil and gas industry in Nigeria.

The bill seeks to amend the act by reviewing the sharing formula to accrue more benefits to the federal government.

Nigeria is projected to earn an additional income of $1.4 billion annually from international oil companies operating in the country if the bill seeking to amend a particular section of the act is passed into law.

Buhari signed the much anticipated law from his residence in the UK where he is on a private visit.

Writing via his Twitter handle, he described the new law as “a landmark moment for Nigeria”.

Although Nigeria signed the first set of PSCs in 1993, while the DOIBPSC was enacted in 1999, failure to review the PSC act has reportedly caused the country to lose about $28 billion.

The amendment of section 16 of the production sharing contract act would generate at least $500 million as additional revenue for the federal government in 2020, and an estimated $1.4 billion as from 2021.

In a separate statement, the presidency quoted Buhari as saying with the new law, Nigeria will now receive its “fair, rightful and equitable share of income from our own natural resources for the first time since 2003″

“All this time Nigeria has failed to secure its equitable share of the proceeds of oil production, for all attempts to amend the law on the distribution of income have failed. That is, until today,” he said.

“Rapid reductions in the cost of exploration, extraction and maintenance of oil fields had occurred over these 25 years, at the same time as sales prices have risen.

“A combination of complicity by Nigerian politicians and feet-dragging by oil companies has, for more than a quarter-century, conspired to keep taxes to the barest minimum above $20 per barrel – even as now the price is some three times the value.

“Today this changes. For the first time under our amended law, 200 million Nigerians will start to receive a fair return on the surfeit of resources of our lands. Increased income will allow for new hospitals, schools, infrastructure and jobs.”

The president added that the amendment signals the beginning of beneficial relationship with oil company partners: “one that benefits all – starting with the Nigerian people”.

It is however getting clearer to naysayers, that the Anambra born business Mogul, turned legislator has got a lot to offer, not just his constituency Anambra South but the country with this landmark law coming into force.