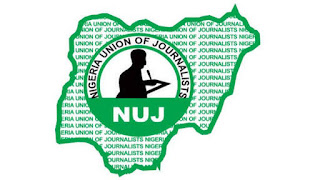 The National Executive Council (NEC) of the Nigeria Union of Journalists (NUJ) has suspended the immediate past National President of the Union Waheed Odusile and National Vice president of zone C South East Comrade Petrus Obi.


The decision was taken at the quarterly National Executive Council Meeting of the Union which was presided over by the National President of the Union Chief Chris Isiguzo with the State Council Chairmen and Secretaries including Imo State Council Chairman Chief Christopher Akaraonye and Secretary Comrade Juliet Dim as well as Zonal and National Executive Members including South East National Trustee Sir Innocent Igwe in attendance.

It was also gathered that the decision of the Union to the suspension of the affected members also followed the flouting of the Union's constitution by going to court over Union matter without following due process.

It will be recalled that the immediate past National President Odusile had recently gone to court challenging the Union's  2018 National Election where current president Chief Chris Isiguzo emerged as the winner after defeating Odusile.

The NEC in session also reviewed the current situation in the Sports and set up a five man committee to reconcile the two faction’s crises.

The Union also calls on President Muhammadu Buhari to declare state of emergency on the deplorable Federal roads across the country especially Ajaokuta Itobe road which links the South East and South South to the FCT.

NEC in session appeals to the Federal Government, INCE, Security agencies and Political gladiators to ensure hitch free electoral processes before during and after the forthcoming Kogi and Bayelsa States elections.

It also approved the use of Centralized Nuj attendance registrar for State Councils to check sharp practices in the compilation of membership lists in States and also frowned at some social media influencers who indiscriminately masquerade as professional journalists.

Governor Bello who was represented by his deputy Chief David Edward Onoja enumerated some of the State projects which include the Ultra modern Outside Broadcast Van and building of Newspaper House and wished the NEC members fruitful deliberations.

The National President however expressed worry over the deplorable State of our roads across the Country which he said held some Nuj NEC members for hours and called for Urgent attention.

The highpoint of the NEC conference were the official hand over of an Award to the National President Chief Chris Isiguzo and the presentation of Centralized Nuj attendance registrar to Imo State Council Chairman Chief Chris Akaraonye and other State Councils.
Email Post