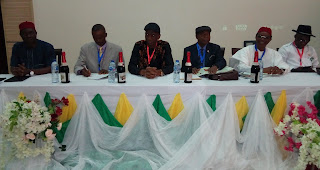 The AGM produced a new set of leaders that will pilot the affairs of the association for another term of office.
The election which was held to produce the new officers was free, fair and credible and the following officers emerged with Dr A Ugezu , as Chairman, Dr S K Onah, as Vice Chairman, while Dr C Ilokanuno emerged as the Secretary of the association. Others are Dr C Ndukwu- assistant Secretary,  Dr I O Oranusi, Treasurer, Dr G Obasikene, Financial Secretary, while Dr H  Nwankwo emerged as the Social Secretary of the association for another term of two years.

In his welcome address, the immediate past Chairman MDCAN, NAUTH, Dr Eric Ihekwuoaba, thanked members of the association for the support they gave him throughout his tenure in office. He called on the federal government to look into the issue of brain drain as it relates to medical tourism which has not brought any good tidings to Nigeria and the Nigerian medical institution.

He tasked the government to look at the areas of need to ensure that the brain drain presently witnessed in the health sector in the country is reduced to the barest minimum. He commended the CMD of NAUTH, Prof Anthony Igwegbe for his support and encouragement to the association and urged him to continue in the same direction with the new administration.


The theme of this year's event captured the essence of reducing the burden of medical tourism and brain drain in Nigeria, in a superlative lecture, aptly delivered by Prof Ozovehe Michael Ogirim mni,  the former National President of Nigeria Medical Association (NMA).


Prof Ogirima in his lecture highlighted on the effects of medical tourism in Nigeria, which has over the year's successfully depleted revenue, the federal government would have earned through inadvertently supporting medical tourism, at the neglect of the health sector in the country. He wondered what is so special in travelling to seek medicare, that would have ordinarily been offered in Nigeria if proper infrastructure is provided for, as most Nigerians end up meeting Nigerian doctors in the countries they travel to seek for such medicare.

Prof Ogirima, in his lecture proffered solutions to the problem which he said includes addressing the rivalry among health workers in the country, adequate training for health care workers, re accreditation and upgrade of training capacities, through setting a framework on government sponsored medical trips abroad, health medico legal environment, prevention of negligence and misconduct by medical personnel, enforcement of legal actions against medical negligence, and need for sanctions on erring professionals who encourage deliberate referrals overseas.


The chairman organizing committee of this year's AGM Dr C.N Ilokanuno, while interacting with newsmen said the theme of this year's AGM was in view of the many mishaps, resulting from the issue of brain drain, occasioned by medical tourism as most Nigerians who travel outside the country end up spending more, yet not getting the desired results in the long run.


In the same vein, while interacting with newsmen, the commissioner for health in Anambra State, Dr Vincent Ogochukwu Okpala, said the theme of MDCAN, NAUTH Chapter AGM for this year, was inline with the state government's efforts towards establishing medical facilities, that will draw medical tourism to the state from other states instead of  Nigerians travelling to countries like India and USA to seek for medical care.


He said that the giant strides of Anambra state government will trickle down to the grassroots by ensuring that there is proper health care infrastructure throughout the state, which will in turn boost the economy of Anambra state.


He however,  regretted the fact that Nigeria is losing annually over $2B to medical tourism. He therefore, commended MDCAN for looking into the issue, which also proffered solutions towards reverting such trends, which has not being beneficial to the health care sector in the country.
Email Post