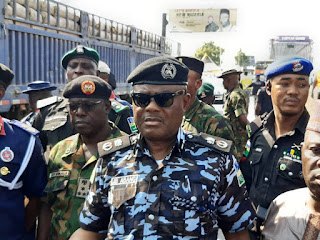 The Commissioner of Police Anambra state has visited the ever busy head bridge, the gateway from the South West to the South East, which has recently seen heavy flow of traffic and gridlock because of the festive season, occasioned by enormous volume of traffic.

In compliance with the directives of  the Inspector- general of Police IGP Mohammed Abubakar Adamu NPM,mni, the Commissioner of Police Anambra  State Command CP John B.Abang,fdc accompanied by heads of other Security  Agencies in the State has today paid an unscheduled visit to Onitsha headbridge and  environs in order to access  Police deployment and monitor traffic situation in the affected  areas.

The deployment which also includes aerial surveillance,patrols and traffic control are meant to ensure that Ndi Anambra and other residents alike celebrate  Christmas and new year peacefully without hitch.

Consequently, the CP on behalf of other Security Agencies in the State  reassures the Public that law enforcement agencies will continue to collaborate and ensure safety  and security of all citizens before, during and after the Christmas and new year celebrations.
Email Post