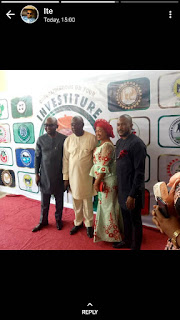 The immediate past President of SECCIMA, Ide J.C Udeagbala in his welcome address thanked SECCIMA  and Mr Humphrey Ngonadi for accepting to led the young regional chamber of commerce in the country. He said its indeed a reason to rejoice with him for emerging as the 3rd President of SECCIMA alongside every other member of his executive council being inaugurated.

He stressed that his collective prayer  is to grant the new executive council wisdom and rooted judgement in the affairs of the organization to stand on that the pact of fairness and equity in sustaining an economic development of the South East.  Ide J.C Udeagbala however maintained that under his watch as the President of SECCIMA he ensured that the organization became well positioned and institutionalized as a regional chamber for the economic development of the South East region, which he said was enabled by their strategic working relationship with the South East Governors forum(SEGF) and other related agencies as PERL-DFID,Policy Development Facility II, Nigerian Policing Program, Microsoft West Africa, Tax Appeal Tribunal, and foreign embassies.

He said that these strategic partners are still working with SECCIMA in providing full support for various economic programs in the south east such as ease of doing business, non-oil export, security trust fund, ICT Start Up Hub, Tax Awareness, Trade missions and business networking. Continuing, he said that SECCIMA, is giving support and collaboration to South East Governors Forum (SEGF) in the areas of security, electricity and  infrastructure. He asked that the Federal Government to urgently develop the permanent site of Enugu International Trade Fair Complex as is in Lagos and Kaduna International trade fair complexes, which will ensure equity and fairness and further promote trade in the south east.

In his acceptance speech, the Mr. Humphrey Ngonadi, the new President said that " my humble self and my newly installed executive council hereby accept with deep sense of humility the responsibility to serve our geo business region in a time like this" The new and 3rd President of SECCIMA, was thankful to God for taking the organization from glory to glory.

He said as the 3rd President of SECCIMA, he appreciates  the south east Governors from the 5 eastern states for their approval of SECCIMA to become an incorporated legal entity.  He commended the efforts of the founding fathers of the association and promised to that the cardinal programs which his administration will base on which is strategic partnership for policy advocacy, SME development, and trade promotion.

The Chairman of the occasion, Dr Cletus Mbadubugwu Ibeto thanked SECCIMA for finding Mr. Humphrey Ngonadi worthy to be the President of the organization in the South East. He eulogized Mr Humphrey Ngonadi, for his astuteness and forthrightness as a known industrialist in the south east who has paid his due in all ramifications.

He therefore tasked members of the organization in the South East to give the new President the needed support to drive development in the south east and Nigeria as well.
Email Post