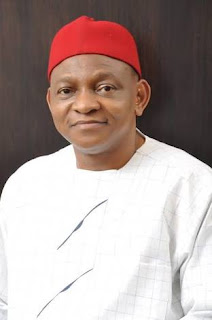 Counsel to Senator Dr Patrick Ifeanyi Ubah, Dr. Onyechi Ikpeazu, SAN, has revealed Obinna Uzoh’s fraud in the Court of Appeal, and exposed how he forged and mutilated official documents which is a sure entry to jail at the conclusion of the suit.

In an affidavit in support of Motion on Notice filed on 6th March, 2020, by Obinna Onya, on behalf of Dr. Ikpeazu, exposed, how Obinna Uzoh embarked on a massive fraud that got him the judgement from a Federal Capital Territory [FCT] High Court sitting in Kubwa, Abuja last year.

On April 11, 2019, the Court purportedly delivered Judgment in the Suit, dismissing Ifeanyi Ubah’s reliefs and granted reliefs sought by Uzoh, despite the fact that he never sought the reliefs purportedly granted him by the trial Court.

The counsel to Senator Dr Patrick Ifeanyi Ubah found it strange that the Judgment was heard and delivered in the absence of the Appellant / Applicant as none of the processes nor hearing notices were duly and validly served on him.

He only became aware of the Judgment, when Uzoh sought to enforce the Judgment of the Court.

He then instructed his Legal Team, led by Dr. Onyechi Ikpeazu, SAN, to ask the Court to set aside its Judgment for lack of jurisdiction, as well as in breach of his right to fair hearing.

The Court dismissed the application to set aside it’s judgement on January 17, 2020.

He immediately filed a Motion praying the Court to strike out the Originating Summons as being incompetent and sought to dismiss the Appeal.

At the Hearing of the Appeal on 4th March, 2020, the 1st and 4th Respondents, Anani Anacletus Chuka and Obinna Uzoh claimed that the Record of Appeal was incomplete and the Court ordered Parties to file Supplementary Record.

On 4th March, Senator Ubah applied for the Certified True Copy of the Original Court File containing all the Court Processes.

Following the application, the Chief Registrar of the FCT High Court directed that the Original Court file should be moved from Court 27 Kubwa, Abuja to his Office, which was instantly complied with.

The Head of Commissioner of Oaths, after supervision, issued Ubah's legal team with certified true copy of the said Originating Summons.

The lead counsel then applied for a confirmation of the date and a filing fee for the Originating Summons was paid.

The Chief Registrar of the FCT High Court confirmed that payment for filing of Originating Summons was paid on the 25th day of September, 2019 by Aroh Ifunanya.

That means that as at the time, the Judgment was purportedly delivered, the Suit had not been filed as filing fees had not been paid, thereby suggesting that the judgement was written well in advance.

It was also discovered that as at the date of filing of the action, that Senator Dr Patrick Ifeanyi Ubah had been duly elected as the Senator representing Anambra South Senatorial District and his election has been affirmed on the 9th day of September, 2019 by the Election Petition Tribunal sitting in Awka, Anambra State.


Ikpeazu however stated without that having regard to the date of payment of filing fees, the suit was a post-election matter and the lower court had no jurisdiction to entertain same.

The Senior Advocate,  maintained therefore that by the above, the Suit, the entire proceedings and the Judgment emanating wherefrom are manifestly incompetent and amounted to being a nullity.

He went further to present several documents showing how Uzoh and his legal team mutilated official court documents to mislead the judge in granting them favourable judgment.

The affected documents include: the Revenue Receipt with Receipt No: 11643044, Aso Savings and Loans Teller with Teller No: 0148979, and,
the Letter from the Office of the Chief Registrar of FCT High Court dated 6th day of March, as well as,
the Nigerian Bar Association Seal affixed on the processes by Counsel to the 1st Respondent named Aroh Ifunanya Esq with Enrolment No: SCN 101933.

Also, Ikpeazu, being aware that NBA Seals have a life span of only one (1) year, wrote a Letter to the General Secretary of the Nigerian Bar Association (NBA) dated 6th day of March 2020, to confirm the date of issuance of the seal affixed by Aroh Ifunanya.

In its response, NBA stated that the Stamp utilized by Ifunanya Nwando Aroh was produced under Batch 137 on the 20th day of August 2019, showing that it was gotten after the ruling has taken place.

According to Ikpeazu, as at the time the Originating Summons was purportedly commenced on 19th October, 2018 and up to when Judgment was delivered, the Stamp and Seal utilized by Ifunanya Nwando Aroh was non-existent as same had not been produced and duly issued by NBA, another product of forgery and mutilation.

It was also gathered that the NBA Seal affixed on the processes by Uzoh’s Counsel, Eziafa Enwedo on his Motion for Joinder dated 27th day of March, 2019, the Counter-Affidavit dated 2nd April, 2019 and an Application for Certified True Copy of Judgment dated 12th day of April, 2019 all bore an expiration date of March 2020.

Not done with that, Ubah’s counsel requested the NBA to confirm the date of issuance of the seal affixed by Eziafa Enwedo on the Court processes.

NBA, in its response, stated that the Stamp utilized by Eziafa Enwedo was produced under Batch 150 on the 11th day of September, 2019.

That again showed that as at the time the Application for joinder by the 4th Defendant and the Counter Affidavit to the Originating Summons were purportedly filed, up to when Judgment was delivered, the Stamp and Seal with Enrolment No: SCN 089053 for Eziafa Enwedo was non-existent as it had not been produced and issued by NBA.

With the above submissions Dr Onyechi Ikpeazu SAN, then,  prayed the appellate court to set aside the judgement and hold Uzoh and his legal team accountable for forgery and mutilation of official documents.
Email Post