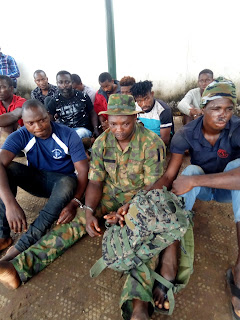 The Nigeria Police, Anambra command, has paraded crime suspects in order to keep the general public abreast of its activities which the  command was been able to achieve in the last two weeks in state, despite the busy schedule of the police games, which was hosted by Anambra.

In the time under review, the command arrested murder and armed robbery suspects, on the 9/3/2020 at about 3:45pm,following intelligence report, as Puff Adder operatives in conjunction with the Command Special Anti Robbery Squad(SARS) arrested at Nanka, one Angus Chukwebuka Nwankwo 'm' aged 30 years and Chidiebere Omeyi 'm' aged 20 years respectively.

It was gathered that suspects had on 27/2/2020 lured a Facebook user simply identified as Willswags from Owerri in Imo State to Nanka. After robbing the victim of his belongings,suspects allegedly killed and dumped his body inside the bush at Nanka in Orumba North Local Government Area of Anambra State. 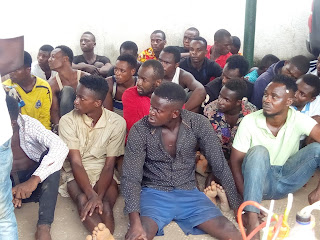 Meanwhile, suspects have confessed to committing the crime  and has led the police to a bush in Nanka where the decomposing body of the victim was found. The corpse has been deposited at the mortuary for autopsy.

Consequently,One Tecno phone,property of the victim was recovered as exhibit from the suspect. The case is under investigation and suspects would be charged to court as soon as investigation is concluded.

In another development the command also arrested gunmen suspected to be members of a car snatching syndicate, which lead to the recovery of snatched vehicles and ammunition.

It would be recalled that on the 13/2/2020 at  about 9:17pm,gunmen suspected to be car snatching syndicate attacked at gunpoint one Chioma Henry 'f' at  Okpuno Awka and snatched her Toyota Camry car.

Following the report,Police operatives attached to the Command Special Anti Robbery Squad (SARS) swung into action and arrested three suspects who led the operatives to their hideouts in fegge where the vehicle was recovered along with a locally made double barrel pistol, case under investigation after which suspects would be charged to Court for prosecution. 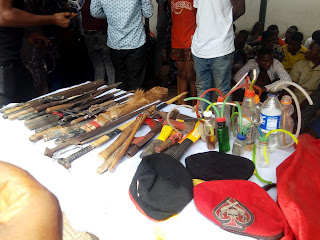 Furthermore the command arrested a suspected cult member who inflicted injury to an Okada rider. It was however gathered that on  04/3/2020 at about 10pm,Police surveillance team attached to Uli Division in conjunction with Campus Anti cult unit arrested one Godswill Chinedu 'm' a 300 level student of Chief Odumegwu Ojukwu University, Uli Campus in Ihiala LGA of Anambra State.

Suspect allegedly conspired with two others now at large and beat an Okada rider who carried him to his lodge at Umuama Uli to stupor after a fracas.

However, not done yet with the beating,the suspect also ran into his Lodge and returned with One locally made double barrel pistol loaded with one live cartridge and a  Axe before he was overpowered and arrested.

Meanwhile,all the exhibits were recovered from the suspect while the Okada rider was rushed to the hospital for medical attention and is responding to treatment.

The police also made public the arrest of 108 suspected cultists and recovered firearms and other incriminating exhibits.

In order to further stem the tide of cultism in the State,the Command has during the period under review, through its Special Anti Cult unit carried out raids at various locations where suspected cultists hibernate and arrested the following suspects within the State as follows,

Consequently, the police in the state has also arrested some individuals for impersonating military officers in the state. It was gathered that on 9/3/2020 at about 12:30am,following intelligence report,Police operatives attached to Ozubulu division arrested one David Otto of Ogbadibo LGA and Joseph Donga of Buruku LGA all  'm' of Benue State respectively.

Suspects were caught dressed in complete Army Camouflage and have all confessed to be fake soldiers voluntarily.

In a related development ,Police operatives attached to 3-3 division Onitsha also arrested one Ejike Chigbata 'm' of Otuocha in Anambra East LGA of Anambra State.Suspect obstructed the Police from performing their lawful duty and claimed that he is a serving military officer by presenting a military  ID card which turns to be fake.

Exhibits recovered from the suspects include two sets of Army camouflage uniforms and one fake ID card.

All cases are under investigation after which suspects would be charged to Court for prosecution.

The arrest of a suspected gun runner was the highpoint of the parade. It was gathered that on the 5/3/2020 at about 6:30pm,Police Surveillance Team attached to B Division Awka in conjunction with UNIZIK Security arrested one Sunday Thankgod 'm' aged 18 years of Opobo-Nkoro in Rivers State. Suspect was arrested with a bag containing two locally made single barrels short guns,five cartridges and dry leaves suspected to be cannabis Sativa.

Suspect is assisting the Police with useful information that would aid investigation after which he and his accomplices will be brought to justice.

Consequently,Police patrol team attached to bridge head division while on patrol at Niger street by service lane, bridge head Onitsha  also arrested a middle aged man with a bag in his possession containing two thousand (2000) pieces of live cartridges. The CP John Abang has directed SARS to take over the case.

The suspect is assisting the Police with useful information about the motive for bringing such cartridges and how he got them after which he would be charged to Court for prosecution.


Also on the 10/03/2020 at about 11:50pm, following a distress call,Police Patrol team attached to Oko division in conjunction with Ndiokwu vigilante group arrested  one Ikechukwu Madukanze of Umunze aged 23years and Okudiri Ogubodo aged 26years  from Enugu State respectively.

Suspects hired a Motorcyclist to take them to Ndiowu village Oko but on reaching a lonely junction ,they brought out a dagger and stabbed the motorcyclist at the back and snatched his motorcycle.

Meanwhile,the motorcycle was recovered and victim rushed to the hospital for medical attention, case under investigation.

On the  07/03/2020 at about 10pm,following intelligence report,Police Surveillance team attached to Oko division arrested one Oyinye Ugochukwu 'f' aged 21years and student of a tertiary institution in Oko.

Suspect, who was allegedly pregnant went  into labour in the toilet ,delivered a baby girl and threw the baby through the window and left.

Meanwhile,the baby was rescued and rushed to the hospital for urgent medical attention and the baby is presently responding to treatment along with the mother who was equally sick.

However,when questioned on why she abandoned her baby,the suspect claimed she doesn't know the biological father of the child.Case under investigation.

*From the totality of the cases recorded so far, a total of 122 suspects have been arrested out of which 25 were charged to court for prosecution,34 screened out and released unconditionally, while 63 others are undergoing investigations. 15 Firearms  and over 2000 live cartridges were also recovered.

CP John Abang stated that one major factor responsible for the overall successes recorded  by the Command was the support of the good people of Anambra State who have being very cooperative with the security agencies as well as robust inter agency collaboration.

The Commissioner of Police urged "Ndi Anambra"and his colleagues in other security agencies to sustain the evel of cooperation at all times. He said "It is my belief that with recent approval by the Inspector-general of Police IGP Mohammed Abubakar Adamu,NPM,mni to recruit Special Constabulary in various Communities to complement the efforts of the police will further enhance safety and security not only in Anambra State but the entire Nation as well.We are indeed in an era where Community Policing remains the vogue and the people we are serving continue to demand for excellent service".

Finally, the Commissioner of Police  reiterated his appreciation to His Excellency, the Executive Governor of Anambra State, Chief (Dr.) Willie M. Obiano for his untiring support to the law enforcement agencies in the State. He also encouraged the good people of Anambra State to be security conscious at all times; and report any strange observation or suspicious movements to the security agencies for prompt response.
Email Post