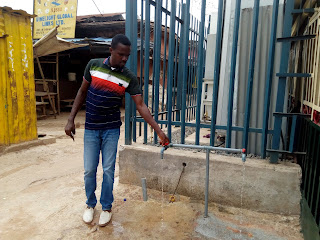 The Chairman of NASPA Agboedo Nnewi, Hon. Obinna Okechukwu has added another feather to his cap, by the reticulation of water throughout the market, as a measure to ensure that the traders in the market protect themselves from the ravaging Corona Virus in the world, which is also inline with the directives of Chief Willie Obiano for everyone in Anambra to keep here hands clean to avoid contacting the virus.

While interacting with Nigerian Notch over the weekend, he said, that the reticulation of water in the market became a top priority to his administration because of the importance he attached to cleanliness, which should be the bedrock of human existence.

He pleaded with the traders to see reason with the state government, on why the market should remain closed for now, which is for their own good, until a directive to open the market again.
Email Post