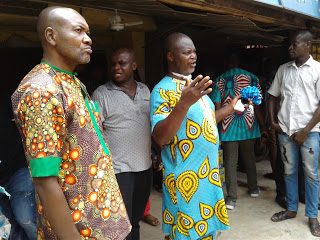 Traders at electrical market Nnewi has extended a hand of fellowship and love to the less privileged in the society, to help them cushion the effects of the  extended lockdown, due to the corona virus pandemic ravaging the world.

In his address while delivering the food items which included over 100 bags of rices, tin tomatoes and Noddle's, the Chairman of a section of the market, Kenneth Ofodum, thanked the state government for its efforts to keep the ravaging pandemic out of Anambra state. He told the people that the corona virus pandemic is real and its not a joke as it is being speculated in some quarters. 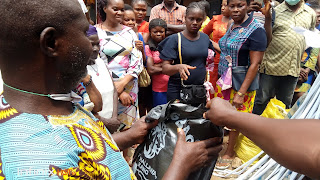 He urged the people to help themselves by staying away from contacting the virus through the keeping of proper hygiene, washing of hands, and keeping of a safe social distance.

He however stressed that the reason behind the sharing of the palliatives was to help the less privileged in the society, who can't afford to take care of their daily needs without going out to hunt for their daily living, get succour during this period of lockdown.

While adding his voice, a former Chairman of the market Mr Ben Olisa, said that the reason they shared the palliatives was to help cushion the effects of the lockdown and to help the state government chase away hunger, especially during this period of lockdown, while people have been asked to stay at home.

One of the traders in the market who spoke to our correspondent, Nzoputa Okereke thanked God for giving them the grace to give to the less privileged at this trying period. He however stated the the prevention of sickness is better than its cure, as he maintained that its better for the people to obey government directives to stay at home to ensure that the corona virus pandemic does not spread any further, being the major reason they thought of the idea of giving out to the less privileged.

Concluding, a former Chairman of the market, Chief K.C Maduanusi thanked God for giving them the grace to help the less privileged in the society, who can't fend for themselves especially during this period of lockdown. He commended the efforts and zeal of their chairman to help the people and tasked other market leaders to emulate them.

Some of the beneficiaries of the palliatives, in the persons of Ifeoma Obichukwu and Mrs. Justina muruako, thanked traders at electrical market Nnewi for their kind gesture and prayed that God should replenish their pockets to do more for others who are less privileged at this trying period.
Email Post