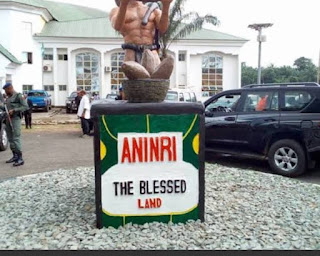 Six Councillors out of ten representing Aninri LGA were yesterday arrested by the Enugu State police command on the orders of the Council Chairman, Hon. Ezekiel Chukwu.

The Councillors, who were quizzed by the Police include the Leader of the Council's legislative house, Deputy, Majority leader, the Chief Whip and two other members.

Our correspondent, reports, that the six Councillors were marched to the state CID Enugu, from Ndeabor, were they went to witness the distribution of palliatives to some indigent persons by the Hon. Commissioner for Transport, Rt. Hon. Mathias Ekweremadu Jnr.

It was however adduced, that the scenerio could not been unconnected to the disagreement between the six Councillors who accepted the leadership of the newly elected principal officers contrary to the wish of the Executive chairman of the council.

The emergence of the Hon. Emma Okereke leadership did not go down well with the chairman which necessitated the trumped up charges leveled against him, which stated that he illegally and forcefully entered the legislative chambers for their sittings, while he was there to conduct their constitutional responsibility of legislation for the council.

The matter which has been taken to the state CID by the Executive chairman is being handled by D11.

It is however unfortunate that the Councillors that came to perform their constitutional rights were thrown into  detention, but was later taken on bail.

When contacted, the Police Public Relations Officer, Mr Ndukwe Emmanuel said they don't have such records.

Many stakeholders who commented on the matter described it as a show of shame on the Council Chairman, whom they said has not even provided any palliative to cushion the effect of the lockdown of his people and called for Governors immediate intervention.
Email Post