Just In; Senegal becomes first country to place an order for Covid-organics! 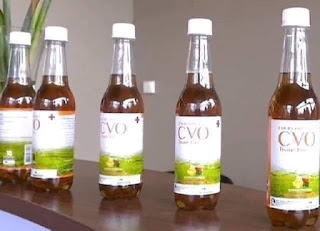 Madagascar's President, Andry Rajoelina, confirmed on his Twitter account that Senegalese President, Macky Sall, congratulated Madagascar on the production of enhanced herbal drink, Covid-organics, and placed an order for the product.

"Africa acts and protects itself against COVID-19. Thank you President Macky Sall for our exchanges and the confidence. Senegal congratulates Madagascar on the enhanced traditional remedy Covid-organics, and places a first order. Long live Africa and long live its natural  riches," the President's tweet read.

Covid-organics is an enhanced herbal drink made by Madagascar's research body, IMRA, to fight against COVID-19. It is said to be preventive and remedial.

Madagascar with a land mass of 587,041 square kilometers with a population of over 27 million people.

Had it’s first corona virus cases on March 23rd with a total number of 9 confirmed cases in its first day.

That looks like a looming danger to the citizens, which spawned fear across every nook and cranny of the nation.

Over a period of a month from 23rd March to April 23, the cases came in randomly till they had recorded a total of 121 confirmed cases with the last case on 19th April.

Over this period they have resorted to searching several possible ways to treating the infected persons and recording gradual number of recoveries up to date.

In general as at today 24th April, they have recorded a total of 58 recoveries and no single death has been recorded

Most importantly, it’s been 5 days now and no new cases have been recorded again in the country.

What exactly are they doing different?

Their president had recently declared that they have found both preventive and curative treatment for the virus.

And have declared it publicly with the president seen while tasting the syrup they have discovered from their research lab on their national TV.

Activities have returned to normalcy in Madagascar and school children to resume their various schools from Wednesday in the coming week.

The medicine which is called “Covid Organic” or “CVO” is made compulsory for the citizens, and to be given free to all school children and most vulnerable citizens while the wealthier fellows to purchase theirs.

And all the money that will be made from the sales of the medicine is to be pushed back into their science research institute.

Could this be the end of coronavirus in Africa?

Well, WHO have not approved the medicine claiming that it was locally made....

Really locally made?
Is that what WHO have to say?
Email Post