THE TRAVESTY AND UNBRIDLED EXTREMISM OF RELIGION IN NIGERIA. 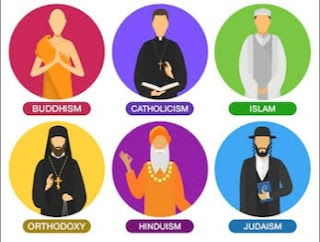 Religion they say is the opium of the masses. Man is a religious being who seeks for explanations on phenomenal happenings on Earth through religious inquiry. The development of human embryos in a woman's womb and the orderly systems of the universe are evidences of the miseries  and superiority of the supreme power of God. When we ponder on God's artistry of creation and the  miseris of the sunrise and sunset we are filled with awe.  These are the convictions   of millions of
people on Earth on the supremacy and the reality of the existence  of God.

In Nigeria, we have atheists who do not believe in the reality and existence of God. Nigeria is also made up of religious people who believe that there is a transcendent and invisible being that controls the  universe. Nigerians are predominantly Christians and Muslims, however, there are also practitioners of the African Traditional Religion who are custodians of our native culture and traditions. But Imperialism and colonization of Africa by white Imperialists nearly obliterated African Traditional Religion.

The basic truth is that every religion is a means and channel by which people reach their God and gods. No Religion is more perfect but  all Religions are good as they do not preach hatred, violence, division and blood-letting. But some religions claim superiority over others. Some embark on soul winning and conversion through coercion and cohesive approach thereby  causing  religious bigotry, tension, intolerance and violence . These are mostly seen between Muslims and Christians in some cosmopolitan cities where adherents of these two major religions live together.
Our nation has experienced a sad history of religious violence that claimed thousands of human lives in the past.

The memories of the maitatsine religious uprising are still fresh in our minds. Maiming and killing of innocent souls in the name of religious violence have become a norm in Nigeria, Muslims and Christians always clash mostly in the Northern part of the country. Also insurgency and killing of Christian faithfuls  which are linked to misrepresentation and twisting of the holy Koran have engulfed our Muslim brothers. Boko Haram insurgents who With sanquinary proclivities have continued in the killing extravaganza while the security agents have maintained taciturn and failed to use  proactive measures in  arresting the ugly situation.
With all these, some have raised the fear of enthronement of Islamic theocracy in the country. But the question is, do the Islamic doctrine and codes encourage and support blood-letting and violence being perpetrated by our Muslim brothers? The answer is NO.

It is really disheartening that Nigerians are intoxicated by alien and imported religious practices. But the doctrinal teachings of both Christianity and Islamism are based on love. Jesus Christ the founder and progenitor of Christianity brought the message of love to mankind. He teaches us how to love others as we love our ourselves. Prophet Muhammed the messenger of Allah, instructed his followers to love one another not to kill non-muslims or infidels. Unfortunately, owing to nuances or differences in the teachings of Muslim sects of Shia and Sunni, the Muslims in some countries are killing one another.

Even among Christians, there is division and hatred. Some Pastors with warped minds have twisted the teachings of Christ in order to satisfy their selfish desires. Some Churches have commercialized and monetized Christianity. They have reduced Christianity to a means of money making and self aggradizement. They have indoctrinated their members with message of things of the world rather than preaching to their members the message of repentance and salvation. Many who believe are deceived. Often, we regale with tales the proliferation and bastardization of Christianity which today have affected the entire Christian faith.

It is indeed a crystal fact that Christianity has been put to a bad use in Nigeria while Islamism has been turned upside down. While some Muslim clerics are radicalizing and brainwashing their members to become suicide bombers some Pastors are hoodwinking their members in order to fleece them of their wealth.
The truth is that  no Religion is bad but it is sad that the practitioners of these two diverse religions have distorted the modules and modus of their faith.

It behoves on our religious clerics to live up to their cardinal and onerous responsibilities as faith moulders to remold the character and beliefs of their members towards the true teachings of their founders which anchores on love and obedience to the will of God and Allah.   Adherents of these two major religions have derailed from the foundation, teachings and admonition of their founders, which today has created a negative effect on our larger society. There is a correlation and implicit intercourse between religion and the society. Our backwardness today as a nation is to a larger extent caused by the failure of our religious leaders to lead by good examples and infuse moral regeneration in their members.

Unfortunately, Nigeria is sliding to the dogs. Religion as a tool for national development and social reengineering has been defaced.  We need the spirit of God to redirect  us to the true path of God. Our religious leaders should turn a new leaf, rethink their bad ways and lead their members to the path of righteousness which is expected of them. With this, Nigeria will once again bounce back on the route of sociopolitical progressivism.
Email Post