It was a bad day for the residents of Nkpor near Onitsha Anambra state, as two youths were allegedly killed by a police patrol team on duty, for the enforcement of the lockdown order by Anambra state government in the area.

The PPRO SP Haruna Mohammed, said that frantic efforts is ongoing to restore sanity in Nkpor and its axis and that the commissioner of police CP John Abang has ordered a discreet investigation into the remote and immediate cause of the protest by the youths in the area.

The Police Public Relations Officer, SP Haruna Mohammed, in the state, however revealed that the incident was caused by an unprovoked attack on Police patrol team, by irate youths with substance, suspected to be acid, while the youths  tried snatching some rifles from the police operatives. He further stated that the police on patrol to enforce the lockdown order around New Tyres by UBA, Nkpor in Idemili North LGA of Anambra State suddenly encountered youths, which as a result of the squabble, caused harm on one Operative attached to the team. 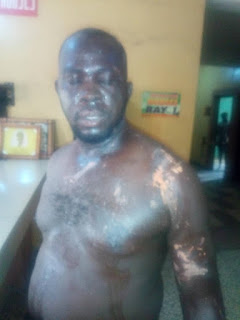 Cpl Christopher Ozor, sustained serious injuries all over his body following the attack while the hoodlums rushed his AK 47 rifle with 30 rounds of live ammunition in a bid to snatch it.

It was however gathered that the team swiftly responded and repelled the hoodlums with gunshots and retrieved the AK 47rifle from them.

Meanwhile, the police spokesperson in the state said that one of the attackers who was fatally wounded was prevented by the miscreants from being taken to the hospital but the injured Police man was rushed to the hospital for medical attention, and is responding to treatment.

Following the incident, Youths in their hundreds holding offensive weapons went on rampage at Nkpor and New parts general area and destroyed Police patrol vehicle with Registration number 009 attached to Awada Division and other Government properties. 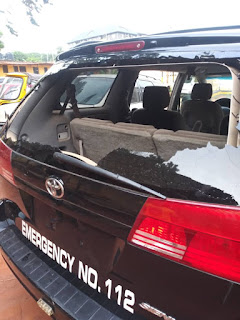 Consequently,Police reinforcement comprising PMF,SARS,Special Anti cult Unit and other Sister Agencies have been drafted to the area to restore normalcy while investigation is still ongoing.


It is however disheartening that the  protest which led to the shooting of a young boy of 20 years right in front of new tyre market Nkpor near Onitsha at about 1:30pm today was the first incident occasioning death since the lockdown started in the state.

Nigerian Notch,gathered that police in a bid to protect themselves shot sporadically in the air, which dispersed the raging crowd, and in the process a stray bullet hit one of the youths who died instantly, while the second one gave up the ghost at the hospital.
Email Post