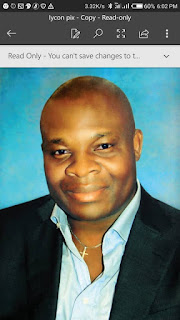 The Chairman and Chief Executive Officer (CEO) of IYCON Group,Chief Ifeanyi Ekwulugo  (Okaonye Egbunaya)has given out food items and cash to the four quarters of Nnewi North LGA in Anambra State.

The Lagos based businessman was one of the first to empower his people with food items and cash so that they can observe the stay at home directive from the federal and state government.

It would be recalled that Chief Ekwulugo was at the forefront of providing relief materials to the Igbo community in Lagos during the explosion that rocked the state.

The CEO, IYCON GROUP, a silent philanthropist has always been empowering the less privileged persons in the society without noise.

A sixty years old beneficiary of the latest humanitarian gesture, Mr Chinedu Okafor thanked the IYCON boss for his intervention at this critical period of staying at home.

He said the philanthropist has not only written his name in marble in sand of time but has always touched the people in a way he can never be forgotten.

"Chief Ekwulugo is not a politician, he is a King maker by all standards and community builder. We have many Foundations that are only active during election periods and most of them are no where to be found now that they are needed most. But IYCON has always been identifying with his people at their time of need. This is the real philanthropy." Okafor noted.

He however urged other affluent individuals in Igbo land who are busy donating to the federal and government account without positively impacting their immediate environment  to rethink and borrow a leaf from the IYCON boss.
Email Post