IMSG punctures another lie from the opposition. 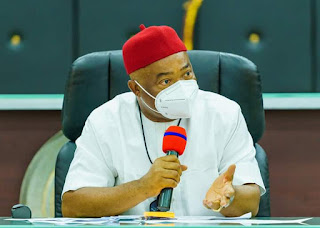 Imo state government has punctured another fake news, by the opposition in the state, which has become there stock in trade in recent times. In a press release made available to Nigerian Notch, the Chief Press Secretary to the Governor, whose office was credited to an official release this morning, which turned out to lies said
"The attention of the Office of the Chief Press Secretary/Media Adviser to Governor Hope Uzodimma has been drawn to fake news making the rounds on social media, purporting that Imo State Government paid ₦8m to Fulani herdsmen, who allegedly lost their cows at Ezinihitte Mbaise."

It went further to state that," in the said fake news, the criminals also purportedly wrote that the Governor met with the leadership of Miyetti Allah Cattle Breeders Association of Nigeria (MACBAN) at the Government House, Owerri."

"Those who generated the obvious fake news also criminally signed off for the Chief Press Secretary/Media Adviser, Oguwike Nwachuku, in a desperate attempt to legitimise their criminal intent and have the buy-in of the public."

"This is not the first, nor will it likely be the last, time agents of the opposition Peoples Democratic Party (PDP) will criminally issue a statement purporting same to have emanated from the Office of the Chief Press Secretary/Media Adviser. They did when former Chief of Staff to President Muhammadu Buhari, Abba Kyari died and, in their warped mentality and hallucination, renamed the Imo State University after Kyari."

The release was of the view that "Their intention then was to deploy misinformation to discredit the government of Governor Uzodimma and cause disharmony between the government and the good people of Imo State." They failed!

"Again, today, May 14, 2020, the same people whose stock in trade is to disseminate false reports on social media to satiate the appetite of their paymasters have been paid to do what they and their sponsors are good at criminality. Again, they have failed!"

For the avoidance of doubt, the Government of Imo State under the watch of our able Governor Uzodimma does not know what the PDP-sponsored criminals are talking about as regards the purported payment of ₦8m and meeting.

The Office of the Chief Press Secretary/Media Adviser, therefore, dissociate itself from the purported press release and purported payment, the imaginary meetings between the Governor and MACBAN, and the gibberish associated with the non-existent meetings.

While the government is very much committed to a society, where constructive criticism helps to bring development, it will continue to have zero tolerance for people who deploy criminality and subjective criticism with the intention of misinforming and misleading the public.

It is a shame that the purveyours of fake news on the current Imo State Government have sold their consciences that one wonders if Mac Zukerberg, the founder of Facebook and also owner of Whatsapp, will not be wondering if they are under a spell.

"On a day Imo people are reflecting and rejoicing over nearly one billion Naira that has been traced to be in dormant accounts in one bank alone due to the recklessness of the past administrations, a gang of PDP-sponsored social media zealots are busy orchestrating fake news, just to divert attention and cause disharmony. What a shame?

The government of Governor Uzodimma is irrevocably committed to good governance and will not be distracted, not even by the resort to fake news by the opposition and their agents as a blackmail tool.

The public in general and Imo people in particular should, therefore, ignore every fake news meant to misinform them about Imo State Government activities, more so, as Governor Uzodimma is not interested in telling anybody lies. The era of deceit is gone.

We also caution the reading public to be wary of fake news materials they are quick to help the criminal-minded propagandists, blackmailers and enemies of development share on social media as doing so will portray them as accomplices, the CPS concluded.