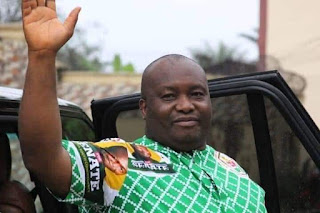 By Chigozie Igbo
The constituents of Anambra South Senatorial District, in Anambra state, are still basking in the euphoria of the  celebration of one year in office of their Sistinguished Senator, Senator Dr Patrick Ifeanyi Ubah, who has shown dexterity and maturity, even in the face of so many cases thrown on his path to distract him.
Little wonder, Plato stated that "Excellence is not a gift, but a skill that takes practice. We do not act ‘Rightly’ because we are ‘excellent’, in fact we achieve ‘excellence’ by acting ‘Rightly."
Senator Dr Patrick Ifeanyi Ubah in the last one year has achieved excellence by acting rightly. His constituents, Anambra state and Nigeria has indeed benefitted from the role he has played in the Senate, most especially in articulating for streams of revenue for the federal government through the signing into law by President Muhammad Buhari the bill SB 21: Deep Offshore and Inland Basin Production Sharing Contract Act( Amendment) Bill,2019.
Its also gratifying to note that the Prince of the Senate, Senator Dr Patrick Ifeanyi Ubah has not only shamed and defeated NaySayers but has also gone ahead to empower his people greatly, which can be seen in his many empowerment schemes throughout the Senatorial District which include, the donation of five units of 300KVA transformers, each to Uga in  Aguata,Enugwu-Ukwu in  Njikoka , Unubi in Nnewi South LGA of Anambra state., Osumenyi and Achina
--The distribution of two hundred (200) brand new motorcycles, across the seven LGAs of Anambra South.
-- Rebuilt the Nnewi, Electrical Parts Market gutted by fire.
--Distribution of Sixty-two(62) brand new tricycles across all the LGAs in Anambra state.
Donation of relief materials to affected traders of the fire Inferno at Mgbuka Obosi.
Distribution of covid19 response palliatives across the 21 LGAs in the State.
In the spirit of giving,  Senator Dr Patrick Ifeanyi Ubah also distributed covid19 palliatives to Ndi Anambra and Igbos in Lagos state. He also brought  the distribution of same palliatives home, where he went to Nnewi Prisons, RECDOT Rehabilitation Centre Ozubulu, Nnandi Azikiwe Teaching Hospital (NAUTH)  and  APLCSD vocational centre  NANKA.
He also  donated  relief materials to traders who were affected by the fire Inferno that gutted ochanja market in Onitsha.
With all these accomplishments just in one year, we don't need a soothsayer to know that Senator Dr Patrick Ifeanyi Ubah will do better in the coming years.
With the cessation of frivolous court  distractions, the stage is now set for more dividends of democracy to the people of Anambra South Senatorial District.
Email Post