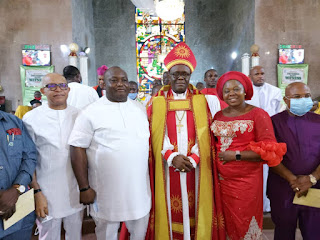 Senator Dr Patrick Ifeanyi Ubah made this known in his remarks at the 2020 Nnewi Diocesan Synod, which held at Cathedral Church of St. Mary, Uruagu Nnewi, today.

The Senator thanked the Nnewi Anglican Bishop, His Lordship Rt. Rev. Ndubuisi Obi for his achievements since he became the new Bishop of Nnewi Diocese.

Senator Dr Patrick Ifeanyi Ubah informed congregants that his commitment to the  promotion of community development is sacrosanct and should be a task for all regardless of the religious creed one belongs to.

Senator Ubah however stressed that he had been providing huge support for various churches including those within the Anglican Communion and promised to do more. He also told the congregation that with the support of prominent citizens under the umbrella of Anambra Progressives, a group he convened, Nnamdi Azikiwe University Teaching Hospital, Nnewi can now boast of an ultra modern medical and isolation center commissioned yesterday at the Hospital's permanent site in Akamili- Nnewi by the Chief Executive Officer of Ibeto Group, Dr. Madubugwu Cletus Ibeto (CON).

Senator Ubah further informed them that another ultramodern medical and isolation center being championed by same Progressives in Nnamdi Azikiwe University, Awka will be ready in a few weeks for commissioning.

The Senator, however announced a donation of two million naira to the Diocese and a brand new Prado Jeep to support the Bishop's service in the Lord's Vineyard.