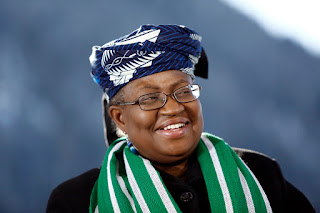 Harvard-educated and longtime World Bank economist Ngozi Okonjo-Iweala is bidding to become the next director-general of the World Trade Organization under a nomination from her native Nigeria while also holding dual U.S. citizenship.

Okonjo-Iweala obtained American citizenship in 2019, her spokeswoman told Bloomberg News, after spending most of her career at the World Bank and living in the Washington suburbs.

It’s not uncommon for international civil servants who spend long stretches working abroad to take a second citizenship, especially when their families have been living overseas with them, a spokeswoman for Okonjo-Iweala said. She’s humbled by the support of the government of Nigeria and its people, the spokeswoman said.

Okonjo-Iweala has a resumé full of qualifications, and there is no citizenship requirement for the job. Still, the revelation of her dual status may become magnified as protectionist sentiment rises around the world and national allegiances are questioned, observers of the process said.

“Unfortunately in this rather mercantilist world we live in, some members might take nationality into account,” said Stuart Harbinson, a former senior WTO official and a senior consultant on international trade for the Brussels-based Hume Brophy communications agency. “It is much more important to get the right person.”

At least two other candidates for the top WTO job disclosed multiple nationalities on their biographies posted online by the Geneva-based organization.

Okonjo-Iweala’s bio doesn’t mention dual citizenship, and there’s no requirement to do so.

Former WTO Director-General Roberto Azevedo officially stepped down on Monday, and a total of eight people are vying for the position. Six men have served as director-generals since its founding in 1995. Two women — Okonjo-Iweala and Amina Mohamed of Kenya — have emerged as front-runners to succeed Azevedo.

Though the Nigeria-born Okonjo-Iweala has twice served as the country’s finance minister, she spent most of her adult life working in America, after arriving in the 1970s to attend Harvard University. She lived in Potomac, Maryland, where she raised four children and worked for 25 years at the World Bank.