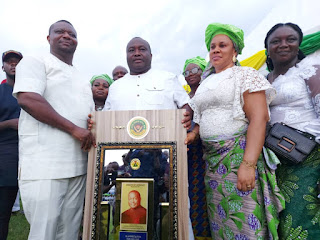 Senator, Dr. Patrick Ifeanyi Ubah on Friday, called on Nigerian women to rise up and join hands with the youths in Nigeria towards driving a status quo change to the current state of affairs, by actively participating in politics.

Senator Ubah who is also the National Leader of Young Progressive Party (YPP), made the call while speaking in a summit organized by the women wing of Afaigboefuna, a socio-cultural organization championing the promotion, of norms and values of Ndi Igbo.

Senator Ubah in his speech, gave accolades to the women for holding the summit, aimed at boosting the political consciousness in womenfolk, thereby reducing political apathy among them.He re-assured them, that he will never relent in giving every necessary support to women in politics, as such will encourage them to put in their best into Nation building. He emphasized that he will always use every lawful means to give them all the necessary support that they need

He however told the women, that he deliberately ventured into the murky waters of politics, despite knowing the implications because of his passion for human capital development, and zeal to change the narrative, towards showcasing to the world, that indeed bringing about life changing economic sector growth and infrastructural developments are not rocket science, but takes an intelligent and  altruistic mind with a people oriented passion for service to be delivered.

He further told them that with the current heightened awareness amongst the youths, since the ENDSARS protests took place, a collaborative political mass action between the youths and the women is all that is needed for the Country to get back on the right pedestal.

The YPP National Leader at the occasion also specially thanked the group patrons for their undiluted support, and urged them to keep on the good works.

Other highlights of the event which took place at Ifeanyi Ubah International Stadium Nnewi include the  presentation of an Award of Honour to Senator Ubah by the women in appreciation of his love for human capital development and women empowerment.

Patrons of the group also received various Awards for their continuous support and guidance towards the  achievement of it's set objectives.