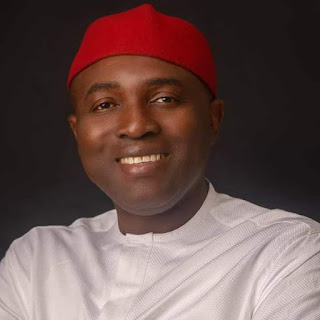 #EndSARS protests escalate in most parts of Nigeria, with killings and destruction, especially the recent mayhem in Nnewi  and its environ, where police officers were killed and stations burnt, the member representing Nnewi North, Nnewi South and Ekwusigo Federal Constituency in the House of Representatives, Hon. Chris Emeka Azubogu, has has called on government at all levels, as well as relevant stakeholders to address the growing trend, before it would go out of hand. He also called on the federal government to look into the demands raised by protesters.

Speaking to Nigerian Notch, yesterday, in Nnewi, Azubogu bemoaned the spate of violence that erupted in parts of Anambra State, which he said, regrettably led to loss of lives and destruction of properties in the affected areas, including parts of the federal constituency he represents.

The federal lawmaker, who likened the reported destruction of lives and properties by citizens, to "someone destroying his home in exhibition of anger," appealed for calm, especially now that government at various levels have expressed preparedness to address key demands raised by protesters.

"I, in particular, and the national assembly in general, is not comfortable with the spate of violence that erupted in parts of Nigeria, and Anambra State in particular. We cannot classify wanton destruction of lives and properties as protest, or counter protest. Resorting to violence isn’t an effective means of resolving issues in any sane society; much more, in a republican society such as ours.

Recalling his earlier appeal to victims of police/SARS brutality in the state, to take advantage of the newly inaugurated Judicial Panel of Inquiry set up by government to present their cases in the Anambra, Azubogu explained that such panel was established to probe extra judicial killings and other injustices meted to citizens by the police.

"Let me reiterate my earlier charge to victims of police brutality in our dear state to please, take advantage of the judicial panel of inquiry recently set up by the Anambra State government to probe police/SARS brutality and extra judicial killings, to ventilate their misgivings. The establishment of the panel is part of efforts to resolve most of the issues raised by the #EndSars protesters," he pleaded.

Azubogu passionately appealed to all in leadership positions, especially parents and religious leaders, etc, to  rise to the situation and be part of efforts to restore peace.