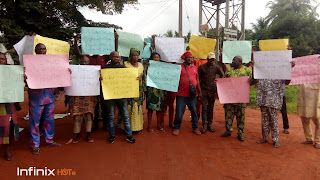 Indigenes of Oranto, Ukpo community in Dunukofia Local Government Area of Anambra; with their youths numbering over 300, today took to the streets to demand unreserved apology from Zone 13 Police Command over alleged torture and embarrassment of their illustrious son, Ichie Izuchukwu Nwabueze.

The Zone 13 Police Command, Ukpo, Anambra State, had on Wednesday, September 23rd 2020, paraded one Izuchukwu Nwabueze, who is also a member of the Ukpo royal cabinet, over alleged impersonation and extortion.

Authorities of the zonal command claimed that Ichie Nwabueze impersonated the Assistant Inspector General of Police, AIG Mohammed Danmallam, and used the name of the police boss to extort money from people; adding that his arrest and subsequent  parade followed series of petitions from various individuals, who claimed that Nwabueze duped them.

But the people of Ukpo community, where Nwabueze hails from, and on whose soil the zonal command is located, viewed the treatment meted on to Nwabueze as an embarrassment to the town and its people.

The placard bearing protesters, who marched from Ukpo town through the Enugu/Onitsha Expressway, described police action as jungle justice; as, according to them, police officials stripped, paraded and photographed Nwabueze without giving him opportunity for fair hearing.

Some of the placards read: "Izuchukwu Nwabueze is our son, leave him alone. His life is precious to us," "Police and the church should leave Ukpo and its local politics," "Striping our son means striping Ukpo community," "Enough is enough: Police, leave our son alone," "Ukpo community demands apology from police for striping and parading our cabinet chief," among other things.

Spokesperson for the protesters, Ichie Ikechukwu Eugene Okwuleze, said that the community would not swallow the shame and embarrassment associated with what was meted on their son, who should have been assumed innocent, until proved otherwise by a competent court.

"We are saddened by what was meted on our son, and a respected member of Ukpo  royal cabinet. We see the development as jungle justice orchestrated by enemies, who feel intimidated by our son's rising profile.

"In any civilised society, a suspect is assumed innocent until proved otherwise by a court of competent jurisdiction. What happened in Izuchukwu's case? Ukpo community demands unreserved apology from the police," he said.

Other speakers, Tochukwu Chukwurah Nwabueze and Chiamaka Onyibor, also condemned the development, and urged restitution on the part of the police to ensure that Ichie Izuchukwu Nwabueze gets the justice he deserves.