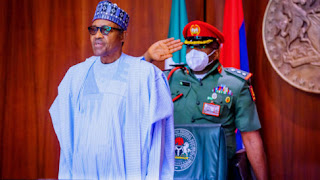 The Defence Headquarters (DHQ) has disclosed that the Troops of the Air Component of Operation HADARIN DAJI has killed scores of armed bandits in separate operations conducted in Katsina and Zamfara States.

This was stated in a press statement made available to newsmen in Abuja by the Coordinator, Defence Media Operations (DMO), Major General John Eneche

Gen Eneche said that the operations in Katsina State included an airstrike executed on Tuesday after intelligence reports indicated that a group of bandits, armed with high calibre weapons, had rustled some cattle and attacked commuters along the Batsari-Jibia Road.

He said that the bandits who were reportedly retreating with the stolen livestock towards Garin Labo, were tracked and located by a Nigerian Air Force (NAF) attack helicopter, as they were heading towards Runka Forest.

According to him, “the helicopter unleashed a heavy barrage of rocket fire on the bandits, killing no fewer than 21 of them, as later confirmed by Human Intelligence sources”.

He added that in a related development, on the same day, an attack helicopter on night armed reconnaissance mission over Tsambre Hill and Dunya Forest in Katsina State spotted another group of armed bandits in the Forest.

He further explained that the bandits were engaged by the helicopter leading to the neutralization of 17 of them while some escaped with gunshot wounds.

He said that the operations in Zamfara State have conducted between Monday and Wednesday respectively sequel to credible human and intelligence reports that led to the identification of the hideouts of bandits terrorizing communities in Konama District of Maru Local Government Area of Zamfara State.

He said that consequently, the Air Component dispatched its attack helicopters to engage the bandits’ hideouts at Yan Uku during which several of them were neutralized.