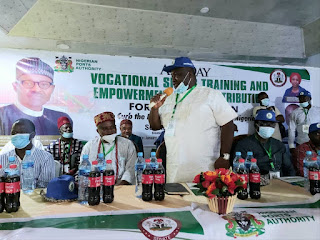 Senator Dr Patrick Ifeanyi Ubah was in Ezira ,Umunze  Orumba South LGA to give out certificates as well as grants and various empowerment items as the three days workshop facilitated by him and organised by the Nigeria Ports Authority comes to an end. The Participants/Beneficiaries included over 250 youths and women from various communities in Anambra South.

In line with his human capital development drive, the Anambra South Senator and  National Leader of the Young Progressive Party (YPP), Dr. Patrick Ifeanyi Ubah on Sunday, put smiles on the faces of over two hundred and fifty youths and women who participated in a three-day vocational skills training programme facilitated by his office in partnership with the Presidency and Nigerian Ports Authority (NPA).

Speaking briefly at the closing ceremony, the Senator thanked the participants for their continuous support and prayers. He further assured  them that as their elected Senator, he will continue to attract quality programmes, action policies and different  interventions to the various communities that make up the Senatorial District. He also used the opportunity to reassure ndị Anambra South that every Local Government Area in the Senatorial District will benefit from various trainings and empowerment programmes before the year ends. The Anambra South Senator while thanking  the Presidency and NPA for approving his request and collaborating with him also maintained that the trainings  will go a long way in reducing unemployment, alleviating poverty and boosting the economy in Anambra South, Anambra State and the nation at large.

Also speaking at the event , the traditional ruler of Ezira ( the host community),  His Royal Highness Igwe Samuel Uche thanked the Senator for his relentless efforts towards promoting the wellbeing of the people. The Igwe who couldn’t hide his joy also appreciated Senator Ubah for sponsoring quality Bills and Motions at the upper Chamber. He further maintained that by attracting the programme to the local government, Senator Ubah has put smiles on faces of various families in the area and such will go a long way in improving the economy in the community, the state and the nation at large. He also reassured the Senator of the community’s continuous support.

Participants at the event which took place at Grace and Joseph Event Centre, Ezira received training in various fields including tailoring, shoe making, hair dressing, makeover, and bakery. They also displayed items that they produced in the process of the various skills acquisition classes.

The Distinguished Senator was accompanied to the event by a member of Anambra Progressives and Development Union, Chief Edwin Igbokwe and Sir. Dr. C.C Okoli (Ezendigbo na Suleja), among others.