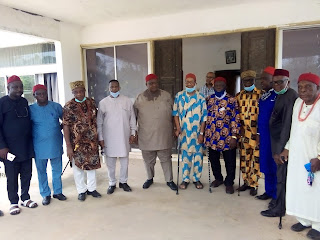 The President General of Ohaneze Ndigbo Worldwide, Prof. George Obiozor, has lead the new leadership of Ohaneze Ndigbo under his watch, to visit Chief Mbazulike Amaechi, an Igbo elder statesman, and the first republican Minister of Transportion in Nigeria at his country home in Ukpo, Nnewi South LGA of Anambra state. Prof Obiozor in his opening remarks said, his administration would be for the overall interest of Ndigbo.

He said that he would do everything humanly possible to stop any form of marginalization and discrimination against Ndigbo in Nigeria.

Prof Obiozor opined that he would not use his position to alienate Ndigbo from the rest of Nigeria; but to negotiate for the inclusion of, Igbo man's Interest, in one and indivisible Nigeria.

Continuing, Prof Obiozor said, “ Ndigbo have been neglected for too long in Nigeria, and in every sphere of life. The new Ohaneze leadership will break that ice of marginalization. Igbos are not evil; we are not destroyers; we are builders in this country. Therefore, any form of evil and marginalization against Igbo must stop."

“But in trying to achieve this, we are not going to remove the Igbos from the rest of Nigeria in any form of secession. We are not going to instigate another civil war or crisis. We are going to use diplomacy to ensure that the Igbos take their pride of place in our collective patrimony called Nigeria.”

Obiozor said, he led his team to meet with the elder statesman, Mbazulike Amaechi, to seek his blessings and wise counsel, to enable the socio-cultural organization face the task ahead with courage, determination and wisdom; adding that “Amaechi is the only surviving link to the old block.”

“Among his peers, there was nobody that has made genuine commitment to the course of Ohaneze Ndigbo more than Mbazulike Amaechi. He made genuine sacrifices from the onset of the apex Igbo union. We are thankful and grateful to still tap from his fatherly counsel.”

Earlier, the Chairman, Council of Elders, Ohaneze Ndigbo, Chief Emmanuel Iwuanyanwu; said that Mbazulike Amaechi, being the only survivor among those that witnessed the formation of Ohaneze Ndigbo, they came to meet with him so that he  would remain the rallying point of whatever the present Ohaneze would do to reintegrate Ndigbo into the mainstream of the Nigerian society.

According to him, “Mbazulike Amaechi is the only person still living today, who witnessed the formation of Ohaneze Ndigbo. So, today, he is the rallying point of whatever we are doing. This is the reason we are in his house today. We need his prayers and fatherly advice.

“The new Ohaneze leadership has not visited any other person, be it governor, business man, or whoever. This is our starting point; because, Mbazulike Amaechi is our rallying point.”

Also speaking, former governor of Imo State, Chief Ikedi Ohakim, said every person should rally round the new Ohaneze leadership to enable it succeed. According to him, the new leadership would not do it alone without the support and goodwill of all well meaning Ndigbo.

Responding, Mbazulike Amaechi commended his visitors for deeming it fit to honour him with such a visit. He went further to express his confidence that the new Ohaneze would deliver on its mandate; while also pledging his total support for Obiozor-led administration.

“I am happy that the President General, Prof. Obiozor; and his secretary, Amb. Okey Emuche; are experienced diplomats. There is no doubt in my mind that they would deliver on their mandates. The two are very well known to me, and I can personally vouch for their integrity.

“My advice is that the new leadership should understand how Ohaneze was formed and the reason behind the ideals of the association; so that it will not derail. I am happy the new leadership has the support of all the south east governors. They are also lucky that I am still around to direct them. If, at any time, you need my counsel, don't hesitate to come to me,” he said.

Others on the entourage of the delegation include, Vice President General of Ohaneze, Ichie Damian Okeke (Ogene), President of Ohaneze in Anambra, Chief Emeka Ododeme; among others.