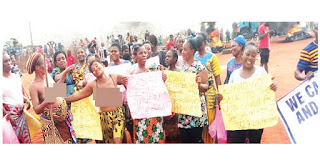 ~ allegeds extortion of Land by Goverment

~ may stall the opening of the airport

There was pandemonium  on Sunday, as hundreds of indigenes of Enuagu, Umuinu and Umuopu kindred of Ifite Umueri, Anambra East Local Government Area of Anambra state, stormed the state's airport project site; chasing away all the workers, and insisting that no work would go on in the site until their grievances were addressed.

Most of the protesters were women, who went uncontrollably wild; some tearing their clothes, and exposing their nudities, as a way of expressing their anger over alleged forceful take over of their ancestral lands spanning about 1,901 hectares of land by Anambra government, without any compensation to the land owners.

Some of the protesters, mostly youths, wielded placards bearing various inscriptions such as: "Enuagu, Umuinu and Umuopu kindred gave 729.606 hectares of land to Anambra government during Chris Ngige era, but Obiano's government forcefully took additional 1,200 hectares," "Obiano, go back to the 729.606 hectares of land originally gazetted for the airport project," "We can't allow this project to go on if government signs no MOU with our community," "Anambra government has taken over our lands; where do we farm? Are we to become refugees in our own land?"

Spokesman for the protesters, Uchenna Ndumanya, told newsmen that his community gave Anambra government 729.606 hectares of land for the airport project, for which they were compensated; but the state went ahead to grab additional 1,200 hectares without consent from or compensation for the owners of the land.

"During Ngige era, our kindred gave 729.606 hectares of land for the airport project, for which we were compensated. But when Obiano came in, the state abandoned the gazetted 729.606 hectares. The state forcefully grabbed additional 1,200 hectares, totalling about 1,901 hectares. There was no compensation!

Also speaking, spokesperson for the women group, Mrs Ugo Nwakonuche, begged Obiano to release the parcel of land, the state allegedly grabbed without the concept of the owners.

She said: "We're supporting Obiano's government because, he is our brother; but we will not allow his government to take all our lands. Where shall our children build their houses? Where shall our people do their farming? Our community is gone without this land."

She said if after the protest the said land was not released by Anambra government, they would be forced to put seven idols in the land in contention, and place curse on the land.