I WILL GUARANTEE ANAMBRA'S FINANCIAL AND ECONOMIC INDEPENDENCE - VALENTINE OZIGBO 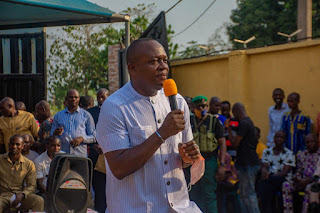 Valentine Ozigbo, a Frontline aspirant in the 2021 governorship election in Anambra State, has promised to ensure the state's financial and economic independence if he is given the mantle of leadership.

Mr Ozigbo, a respected business mogul and philanthropist, made this declaration on Wednesday, March 10, 2021, when he visited Ayamelum Constituency as part of his ongoing tour of the 30 constituencies in Anambra state.

Addressing the large gathering, Ozigbo said that Ayamelum was blessed with fertile land and is capable of becoming a strong economic hub not just in Anambra, but the South East region.

"If the agricultural potential of Ayamelum is fully harnessed, I have no doubt that its financial and economic independence would be guaranteed," Ozigbo remarked.

"Unfortunately, this is not the case and we have not moved along with current global trends in agricultural production and the production chain.

"We will leverage technology to make the agricultural process less-tedious. This way, we become creatively competitive," the respected business leader added.

Ozigbo, who is the immediate past President of Transcorp Plc, thanked the Peoples Democratic Party (PDP) faithful in Ayamelum for their unwavering support for the #KaAnambraChawapu project, assuring them that they will feel the impact of good governance under his watch.

A team of powerful stakeholders from Ayamelum was on hand to receive Mr Ozigbo, including a former member of the House of Representatives, Honourable Gabriel Onyenwife (Africa); Honourable Udoji Amedu (Aya); the PDP Chairman in Ayamelum, Deacon Bonny Okoye; a chieftain of the party, Chief Goddy Ejiofor (Ikenga) and a host of others. All the ward chairmen, women leaders, youth leaders, vice chairmen and secretaries of PDP Ayamelum were also present.

Mr Ozigbo was accompanied on the visit by several members of his campaign organization, including Honourable Tim Egboka, a former member of the Anambra State House of Assembly; Ikechukwu Akaeze, a former chairman of the PDP in Dunukofia local government area; Sir Izuchukwu Oraelosi, the General Manager of the Valentine Chineto Ozigbo Foundation, and Lady Juliet Anaeme.