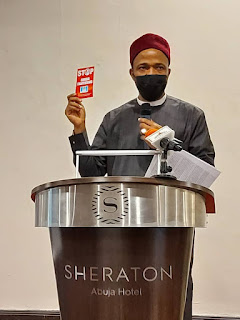 The minister of state for Education, Hon. Chukwuemeka Nwajiuba has rolled out the Infused Trafficking in Persons (TIP) school curriculum in Nigeria, in conjunction with the Honorable minister of humanitarian affairs, Disaster Management and Social development, Hajia Sadiya Farouq, with the DG of NAPTIP, Hajia Imaan Suleiman Ibrahim.The occasion also had in attendance,  commissioners for education from the 36 states.

The education summit which kicked off today at the Ladi Kwali Hall of Sheraton Hotel Maitama, Abuja, was basically to introduce, Infused Trafficking in persons school curricula for the Nigerian educational sector for awareness, sensitization and adoption. The education summit which is facilitated by the ministry of education, National Agency for the  prohibition of traffic in persons and other related matters(NAPTIP) and international center for migration policy development (ICMPD) is aimed at bringing together international players and relevant interest groups for the fight against trafficking in persons, especially children and young adults.

Hon. Chukwuemeka Nwajiuba, while delivering the keynote address on behalf of the minister of education, Mallam Adamu Adamu, stressed that Nigeria has a national policy for the protection and assistance for trafficked persons. That notwithstanding, human trafficking, he said involves recruitment, Transportion, transfer, harboring or receipt of people through deception and coercion, which is the worst form of human degradation, deprivation and violation.

The minister said " it works against the Cardinal provision of the Constitution of the Federal Republic of Nigeria, which ensures the security, welfare and the human rights of it's citizens. Victims of human trafficking are usually subjected to various forms of physical assault, exploitation and abuse resulting in highly traumatized individuals. Trafficked persons are often rejected and exposed to health hazards, such as HIV/AIDS, STIs, mental disorders and other related problems."

Continuing, the minister stated, that over 8 million Nigerian Children have gone through the worst forms of child labour, serving mainly as domestic servants, street urchins, beggars and prostitutes. The sex trade in Europe, he said is evidently fuelled by the surge in child trafficking, while 80% of the statistics are Nigerians.

Hon. Nwajiuba however bemoaned the rise in the practice of child trafficking, especially in Nigeria, which has become a source of worry and embarrassment to Nigeria, hence the establishment of NAPTIP in 2003 by the federal government. He commended the agency for it's proactive role since it's establishment, with recorded cases of adequate control, rehabilitation of trafficked persons and victims of child labor.

The initiative to infuse the issues of trafficking in persons into the national curricula, the minister said, was informed by the task on the education sector to  serve as a stop gap, towards preventing the menace, especially with emphasis on the youths.

He further stated that, education having been identified as the most powerful weapon against ignorance, will be used as a catalyst for change.

He tasked the school community, to discern the indicators of crime and how to respond when a student becomes a victim, while stressing that it's imperative to have information about the risks factors, and ways to identify traffickers using school protocols, potential partnership and other resources.

He maintained that the cost of reaching one student, through education is significantly less expensive that providing services to a child who is a victim of trafficking. "Education is the key to prevention. As a community of educators, let us take action to safeguard our children. It has therefore become necessary in our schools and campuses to join or establish school and institutional club to raise awareness about trafficking and initiate action throughout the school community."

He however stated that the synergy between the federal ministry of education and NAPTIP is to accept the responsibility in there purview, which is proper guidance and prevention of the Nigerian child from falling victim to trafficking. He therefore called on students and teachers to disseminate information on the Infused Trafficking in persons curriculum, that is now part of the basic and secondary education curricula, as developed by Nigerian Education Research Development (NERDC) as the rollout of the document with soon commence in the 110 Federal Unity Colleges across the country, while those of the 36 states and the Federal Capital Territory, (FCT) schools will follow after.

The minister also informed Nigerians that issues of trafficking in persons has been Infused into the minimum standards for colleges of Education (NCCE) as over 600 lecturers have been trained on pedagogy, of teaching processes, both at the federal, state and private institutions in the country. The universities and polytechnics are not left out as the process would be inculcated in these institutions he concluded.