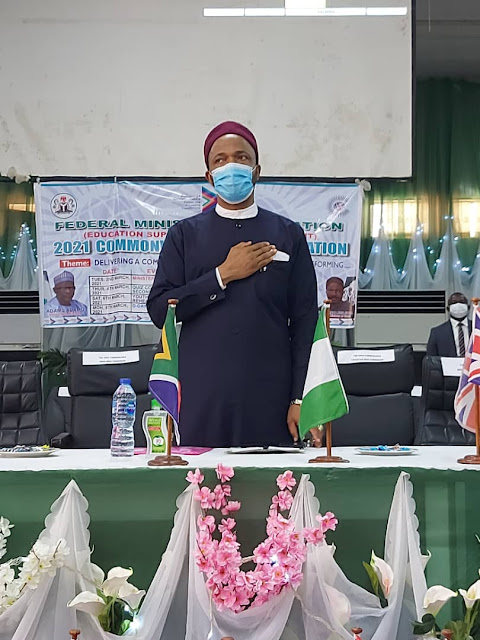 The Hon. Minister of state for Education, Hon. Chukwuemeka Nwajiuba (PhD) has asked member nations of the commonwealth, to ensure that resources are harnessed for mutual cooperation, towards delivering changes in trade, investment, human rights, democratic governance, quality education and the digitalization of learning, while not forgetting to impact on the issue of women and girl child education and empowerment.

He made this call yesterday, at Idris Abdulkadir Auditorium, Maitama, of the National Universities Commission (NUC)) while delivering a keynote address at this year's commonwealth day commemoration, with the theme "Delivering a common future: connecting, innovating and transforming". The minister said that it's important to note that this year's theme was for the 2020 commemoration, and will also be used for the 2021 biennial commonwealth heads of Goverments' meeting (CHOGM) that was not held in 2020, because of the corona-virus panademic.

He went down memory lane to highlight on the history of the commonwealth, which has 54 sovereign nations, that accepted to share the vision and values enshrined in the commonwealth charter. He stressed that the theme of this year's commemoration has further motivated member nations, towards keying into commitment to promote good goverance, trade, equality, peace and empowerment of vulnerable groups using human and natural resources.

The minister, said that with this synergy and the emphasis on the expansion of quality education to take care of vulnerable groups, using all forms of innovations, demonstrates that the commonwealth of nations are geared towards making the world a better place to live in.

Continuing, he futher tasked state ministries of education to sensitize educational institutions to align with the theme of this year's commemoration, through the various commonwealth clubs in schools, whom he said are expected to be fully involved nationwide. He said that with the spectacular display by young people using various costumes to represent the 54 nations of the commonwealth, has shown the true reflection of creativity, which in turn has also exposed the students to learn about the cultures, national flags, languages and the historical past of other commonwealth countries.

Hon. Nwajiuba, however called on the students, who are the future generation to learn to copy the virtues of collaborations of one another, for the common good of member nations. In the spirit of love, the minister admonished the participants to remember that Covid19 is real, and still very much around with us, while asking them to continue with hand washing, as often as possible, while they also use hand sanitizers, face mask and also maintain social distancing to ensure that there safety and that of others is guaranteed.

The minister was joined by the Honorable Minister, Foreign Affairs, Geoffrey Onyema, the Permanent Secretary,  Federal Ministry of Education,  Arc. Sonny Ochono, while the High Commissioners in  Nigeria; for Jamaica, Sierra Leone,  Ghana, Kenya, Canada, India were also present to witness the commemoration of this year's commonwealth day.