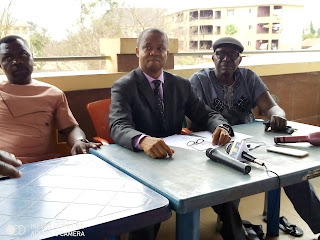 The chairman, Board of Trustees, Nnewi Professionals, Prof. Obi Bertrand Nwosu, has called on political parties to consider Old Nnewi in the political arithmeticn on who becomes the next governor of Anambra state.


In a press conference in Nnewi today, Nwosu noted that the best way for the zone to produce Anambra governor come 2022 was for the zone to be united and work as one united strong force, which has started in earnest and therefore called on the major political parties of APGA,PDP, APC, and YPP to consider Old Nnewi on whom they will give there ticket.

Nwosu further suggested that Nnewi, having contributed immensely to the socio-economic development of Anambra and Nigeria, and having been marginalized politically since the creation of Anambra State thirty years ago, should be given utmost consideration.

“In as much as there is strong agitation for Anambra South to produce next Anambra governor, it is important to emphasize that it is long overdue for Nnewi man to be elected governor. From every consideration, Nnewi, as a community, remains one of the tip top in the economical, industrial, social and political sector in the state. Nnewi has, indeed, paid its political dues long time ago in Anambra and Nigeria political setting, and has also continued to contribute massively to the economic growth and development of Anambra and Nigeria in general.

“It pleases my heart that it has been agreed basically by stakeholders in the three senatorial zones of the state that morally, it is the turn of Anambra South to produce the next governor after Obiano, who is now completing his second tenure.

“Down to Anambra South, there is no doubt that no community can claim to have contributed more than Nnewi in any level or capacity to the present development and growth of Anambra.  Therefore, our consequent demand is that political parties must find their candidates from Nnewi with a view to brightening their chances of victory at the poll.

“I urge the stakeholders, traditional rulers, business community, Nzukora Nnewi, and all to throw their weights behind this agitation. I also call on all communities in Anambra South and others from the other zones to support Nnewi man as the next governor of Anambra State,” he added.
Email Post