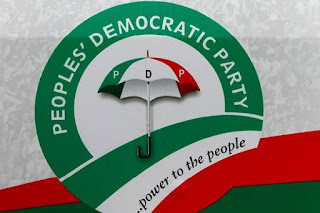 ......... Describes former National Chairman as the harbinger of one man stranglehold over PDP in Imo State

The factional New PDP in Imo State has issued a statement welcoming the removal of Prince Uche Secondus as the National Chairman of the Peoples Democratic Party.

In a statement made available to journalists in Imo State, the N-PDP stated that the ouster of Secondus will open the Imo State PDP to broader participation by the silent majority of members of the party who has been excluded from party affairs since after the governorship primaries of the party in 2018.

Detailing the bias of Secondus in handling the affairs of the party in Imo State, the N-PDP posited that it was under the direction of the former chairman that Chief Osita Chidoka was sent to Imo State to mismanage the three man delegate election of the party which saw to the removal of the authentic delegates and their illegal and fraudulent substitution with a fake list from a known ally of Secondus who went on to win the party primaries.

The N-PDP also alleged in the statement that it was the same Secondus that brought in the compromised Senator Nwaka from Abia State to come and conduct the party primaries at the Kanu Nwankwo sports arena despite their written petition against Senator Nwaka.

Describing their three years of disenfranchisement from Imo State PDP as inhuman and despicable, the N-PDP thanked His Excellency Governor Nyesom Wike of Rivers State for coming to the rescue of PDP and by extension liberating the Imo State from the clutches of a known political tyrant and dictator who has foreclosed all avenues for reconciliation with a section of membership of the party who exercised their democratic rights to choose a candidate of their choice in the 2018 party primaries.

The Imo N-PDP while expressing a vote of confidence on Senator Samuel Anyanwu called on the new leadership of the party at the national level to convene a stakeholders meeting of Imo PDP where all shades of opinion will be heard with a view of disbanding the present state executive and the composition of an all inclusive party structure from the wards to the local government and at the State level.