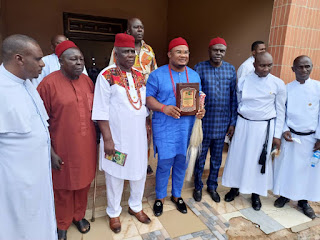 Ichie Sir Izuchukwu Nwabueze has received a Merit Award of " AMBASSADOR FOR CHRIST" from the Postulants Students' Union Government of Institute of Theology, Paul University, Awka during the 2021 Presidential Address/ Charge of the President- Post. Ezeala Raphael Uche with the theme; " RESTORATION".

The Award Conferrment came  in confirmation of an earlier letter of the Award delivered to me on September 24,2021 by a twelve man delegation of the Postulants of the Institute of Theology Paul University Awka. I was accompanied to receive the Award by Ichie Emma Ogbuka Deputy leader of Cabinet Business, Igwe In-council, Evang Chief Ikechukwu Okafor( Asst Secretary General of Ukpo Improvement Union and Secretary Ukpo Economic and Investment Board), Chief Francis Amanchukwu ( Special Adviser to the Igwe of Ukpo on Judicial Matters ) among others.

It is Worthy of note that Ichie Sir Izuchukwu Nwabueze had received a Fellowship Award of the St. Paul's Chaplaincy of the Institute of Theology Paul University Awka in 2017 under the Chaplainship of Rev'd Canon Jason Onyeakagbusi. He sincerely thanked the Management of the University, the Institute and the Postulants Students' Government for the Award conferred on him, while he returned all glory to God by whose Grace it was made possible.